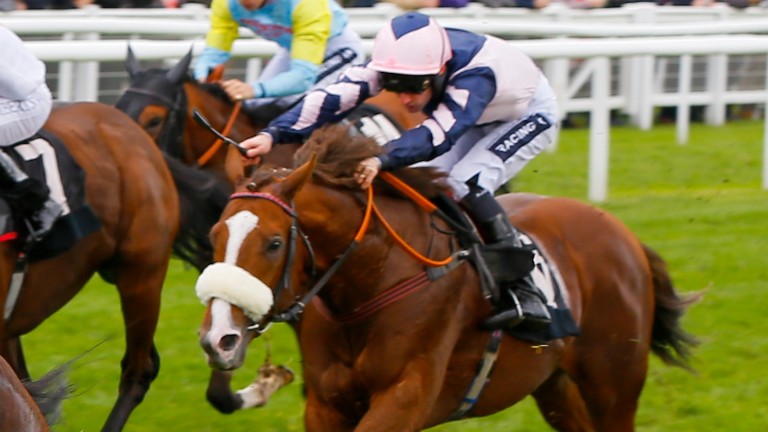 Kings Gift tries to give Michael Dods a first Classic winner with his first Classic runner
Mark Cranham
1 of 1
By Lee Mottershead 6:00PM, MAY 13 2017

To Michael Dods, Mecca's was an angel. Now he hopes Kings can be a gift.

At York last August superstar sprinter Mecca's Angel captured the Nunthorpe Stakes for the second time to give Dods the most magical moment of his career. Now she is retired, while fellow stable star Easton Angel has been sold to join Aidan O'Brien – among the County Durham man's rival trainers in Sunday's Abu Dhabi Poule d'Essai des Poulains.

For Dods, Kings Gift breaks new ground as the Greenham Stakes fourth becomes the yard's first Classic runner when carrying the Mondialiste colours of Geoff and Sandra Turnbull in the Deauville showpiece.

"We've won the Nunthorpe twice, but this is our first time in a Classic," said Dods.

"The owner loves his racing and was keen to supplement the horse. This is a big step up from Newbury, but the ground was quick enough for him there and the extra furlong in France will suit him. He's in good form and Paul Mulrennan likes him, so the hope is if he runs to his best he could get a place.

"It's exciting, as we want to be in races like this, but it would have been nice to be going into it with a better chance."

Win or lose, Kings Gift's Poulains participation returns Dods to the Group 1 stage. And it is exactly where he wants to be.

He continued: "You're always going to miss horses like Mecca's Angel and Easton Angel, especially Mecca's as she took us to the places the big yards go to and won us two Nunthorpes. Any trainer would miss horses like that. They were close to everyone's hearts here.

"This is one of those years when we have a lot of two-year-olds and we won't be rushing them. We're making next season's three-year-olds."

One of this season's three-year-olds could yet give Dods a day to remember at Deauville.

FIRST PUBLISHED 6:00PM, MAY 13 2017
It's exciting, as we want to be in races like this, but it would have been nice to be going into it with a better chance