Doctor Harper bids to go one better this time 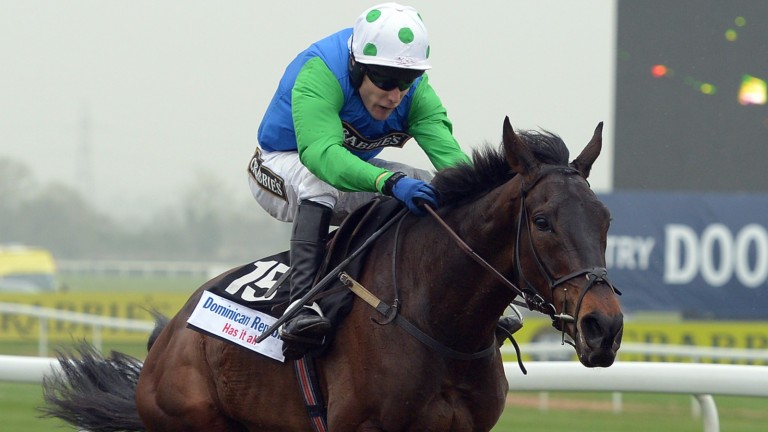 Doctor Harper, who went down by a short head to Tour Des Champs in a Cheltenham thriller on New Year’s Day, will have plenty of supporters despite having been put up 7lb for that defeat.

Although nine years old, the son of Presenting remains relatively lightly raced over fences after just seven starts and could be open to further improvement at this longer trip.

The lightly raced Nigel Twiston-Davies-trained novice Ballycross and Tom Symonds’ Kaki De La Pree are others who could prove popular.

Three previous winners of this race, namely Russe Blanc (2016), Shotgun Paddy (2014) and Rigadin De Beauchene (2013), are in opposition. Shotgun Paddy is the shortest price of the trio.

Three for Lee and Williams

Trainer Kerry Lee, among the winners of late with Matchaway and Happy Diva,runs Mountainous, Goodtoknow and Russe Blanc. Venetia Williams, another who does particularly well in this type of staying contest, also saddles three – Houblon Des Obeaux, Emperor’s Choice and Rigadin De Beauchene.

Warwick is not a track that suits every horse and favours those who can occupy a handy position and get into a good rhythm. Only six of the 20-strong field – Vivaldi Collonges, Sego Success, Shotgun Paddy, Midnight Prayer, Russe Blanc and Rigadin De Beauchene –have won over the course before.

Harry Derham, assistant to Paul Nicholls, trainer of Vivaldi Collonges
He has a lot of weight but his record round Warwick is good. It’s just a worry he hasn’t been so effective in big fields in the past. If he can get into a rhythm and not get crowded in the early stages I expect him to run well.

Venetia Williams, trainer of Houblon Des Obeaux, Emperor’s Choice and Rigadin De Beauchene
Houblon Des Obeaux ran well in the Welsh National. He’s in good order. The ground will suit Emperor’s Choice better than it did at Chepstow. Any more rain would help him. Rigadin De Beauchene was brought down in the race last year when in the process of running well. He seems in good form too.

David Pipe, trainer of Doctor Harper
He went up 7lb for finishing second at Cheltenham, which will make life tougher. He should like the conditions and the step up in trip, having stayed so well last time.

Alan King, trainer of Sego Success and Midnight Prayer
Sego Success started favourite for this race 12 months ago but got no further than the second fence. He has run well on both his outings this season, finishing in the frame at Bangor and Doncaster, but we are trying him in blinkers for the first time. We schooled him in them on Monday and they seemed to sharpen him up. He goes there in good form. Midnight Prayer missed the cut in the Welsh National, which was a shame although he would never have beaten Native River. He likes the course and needs this marathon trip.

Emma Lavelle, trainer of Shotgun Paddy
He enjoys Warwick and the ground should suit. It’s going to be a proper test in the conditions. We were disappointed to miss the cut for the Welsh National but the bonus is we have a fresh horse for the Classic.

Kerry Lee, trainer of Mountainous, Goodtoknow and Russe Blanc
The more rain the better for Mountainous. All three of mine are in great form and, while it’s obviously a very hot race, I feel they’ve all got each-way chances.

Nigel Twiston-Davies, trainer of Ballycross
He’s a novice and that’s the concern, but hopefully he’s well handicapped. I think he’ll be suited by the longer trip – he’s seen out all his races really well.

Jonjo O’Neill, trainer of Spookydooky
He's in great form and been unlucky to miss a few races when racing was called off. The trip will suit him and the ground should be okay. He has a sporting chance.

FIRST PUBLISHED 6:00PM, JAN 13 2017
He went up 7lb for finishing second at Cheltenham which will make life tougher. He should like conditions and the step up in trip, having stayed so well last time