Ruby Walsh: do I feel lucky I won't go to work and get hurt? Yes that's a relief 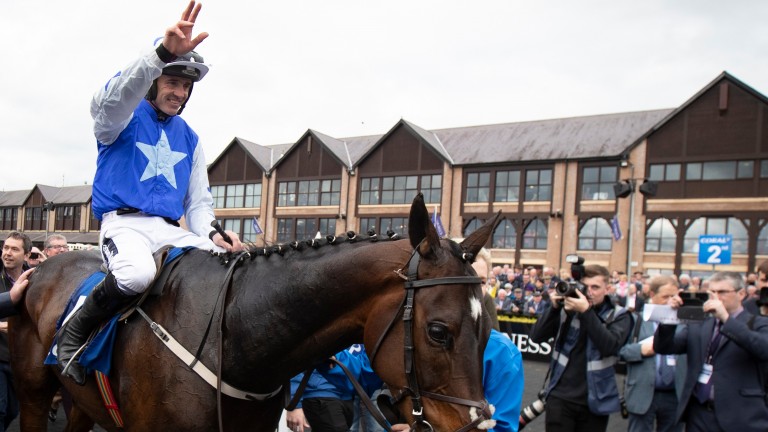 The last salute: Ruby Walsh announced his retirement on dismounting from Kemboy following the pair's success in the Coral Punchestown Gold Cup on Wednesday
Patrick McCann
1 of 1
By David Jennings and Scott Burton UPDATED 3:14PM, MAY 2 2019

Ruby Walsh says he feels lucky to have retired from riding in one piece.

Hailed as one the greatest jockeys of all time, Walsh stunned the racing world when he announced his immediate retirement from the saddle on Wednesday evening after guiding Kemboy to a stirring success in the Coral Punchestown Gold Cup.

The 39-year-old, who is now seeking to make a success of his second career in racing media, said: "A jockey's life is a hard life. There are plenty of injuries and there is an average of ten injuries in a jockey's life, but to have an average of anything someone has to be on the high side and someone has to be on the low side. So it's fair enough to say I was on the high side.

Congratulations to my great friend @Ruby_Walsh on an amazing career. He was like Lionel Messi on a horse. What he had is uncoachable unteachable just better than everyone else.

It will now be Paul Townend as well as David and Danny Mullins who will be riding the cream of the talent for Willie Mullins, but Walsh does not not expect to feel too much in the way of regret.

"I've had plenty of practice of looking on at Willie's horses from the sidelines," said Walsh.

Part of any high-profile sportsman's life in the 21st century is being a target for criticism and abuse on social media and Walsh has been something of a magnet for attacks, especially in the wake of high-profile incidents such as Annie Power's final-flight fall at Cheltenham in 2015.

In a Paddy Power advert he famously confronted one Twitter troll and tied them to the back of a speeding truck, but in reality Walsh says the criticism never got to him.

He said: "The social media stuff didn't really bother me. You have to read it for it to bother you. Now, I'm not ignorant enough not to know that I didn't get my fair share of criticism on it but I didn't read it.

"I'm old-fashioned, I still read newspapers. I still buy the newspapers every morning. I prefer to read fact than some person's opinion who I have never met and don't know."

When I coach a young jockey the 1st one I get them to watch is Ruby Walsh through a race. Happy Retirement to a true great of the saddle

That love of newspapers can now be expressed as Walsh intends to extend his relationship with the Irish Examiner, while he will also continue working with both Paddy Power and RTV as a pundit.

They will be the public-facing aspects of Walsh's new career, while he plans to continue to have plenty of day-to-day involvement with the Mullins team as well.

However the decision not to carry on punishing his body as a professional jockey is one Walsh says he came to as long ago as last summer, though the circle of people who knew that Punchestown would be his swansong was incredibly tight right up until very recently.

"If Kemboy hadn't won I would have gone on to Bapaume and then to Melon and then to Benie Des Dieux on Saturday, then ended up in Paris," said Walsh. "I was always going to go out on a big one and if I had one regret it was that I never won a Grand Steeple-Chase de Paris. That's the only race I didn't win that I would have liked to have won.

"In my own mind the decision was made some time last summer. I said to myself that I would get out at Punchestown. Then Rathvinden came along and I thought I might get out on him at Aintree but Tiger Roll got in the way.

"To me, the end of the year is Punchestown. It's here. The Grand National is iconic. It stands on its own. Other than that it was always going to be here when I walked away."

FIRST PUBLISHED 9:56AM, MAY 2 2019
It was hard to watch horses I could have ridden, but I will now be watching horses which I cannot ride any longer. It will still be enjoyable

Ruby Walsh: Faugheen's first defeat was my fault - I was trying to be too clever Red-hot Mike O'Connor proves the master once again for in-form Henry de Bromhead Rachael Blackmore bids for more big-race glory - but this time she's on the Flat Last race off: can Willie Mullins and Ryan Moore strike with fancied Saldier? Willie Mullins names the five horses he plans to take to Royal Ascot next week