Disko out to leave Meade dancing at Punchestown 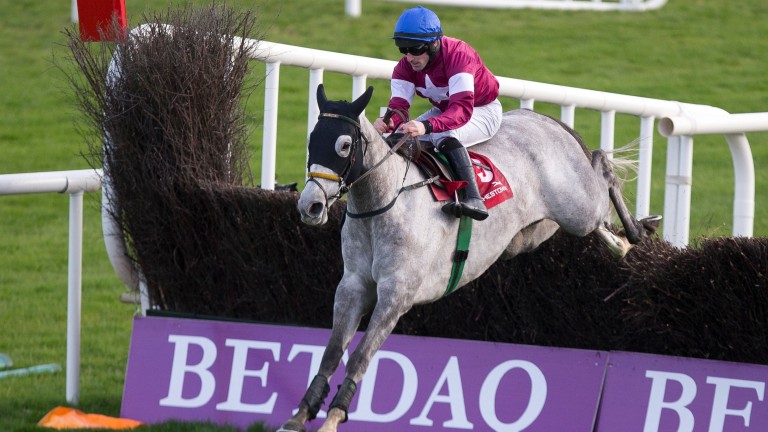 Disko is likely to go off the short-priced favourite in this afternoon’s Grade 2 Florida Pearl Novice Chase at Punchestown.

Noel Meade has never been shy about hiding his admiration for the strapping grey, and this afternoon the son of Martaline has the opportunity of going someway to fulfilling the promise he showed in a stop-start hurdles campaign last term.

The JLT Novices' Chase at Cheltenham has already been talked about for the Gigginstown-owned gelding who made a satisfactory start to his career over fences at Punchestown last month.

After hitting a fence down the back straight with a circuit left to run, Disko seemed to learn from that mid-race experience and jumped well on the whole to win with his head in his chest.

Another Gigginstown chaser who has made an encouraging start in this code is the Mouse Morris-trained Nambour. A bumper and hurdles winner when trained by Willie Mullins, the son of Sholokhov was too good for Free Expression on debut at Galway last month.

Another former Mullins-trained Gigginstown chaser, A Toi Phil, also looked good on debut for Gordon Elliott when winning at Down Royal.

Elliott believes today’s race is open, and while A Toi Phil looks to be his most obvious contender, the Cullentra House-based handler was keen to stress that all three of his runners deserved their place in the line-up.

He said: "It's a good race and I could make cases for the three of mine. A Toi Phil won well at Down Royal and couldn't have done it any better really. That was a nice start to his chasing career and he should come on from that.

"Jetstream Jack also made a nice start to chasing at Tipperary and I would say the further he goes the better he will be.

"Space Cadet won at Roscommon and the runner-up has won since. It's a step up for him but he is working well.

Noel Meade is out to record his first win in the race since 2010, and said: "Gordon [Elliott] has a few nice ones in it. I'm very happy with Disko and we are looking forward to it.

"I was happy with his chasing debut at Punchestown. He made one mistake down the back straight but he learned from it and he's been schooling very well since. He's in good form and I am hoping for a good run."

Mouse Morris believes Nambour has solid claims, and said: "He will need to have improved from his beginners chase win and Galway and I hope he has. It's a very good race and it's open. I think he has a chance."

Georges Conn is likely to be sent off at big odds, but the ever-confident John Ryan believes he is a horse on the up.

"He's a work in progress, and if the others were to fall in a hole, he will be there to pick up the pieces. He's a good horse that could be worth following," Ryan said.

FIRST PUBLISHED 6:00PM, NOV 19 2016
He made one mistake down the back straight but he learned from it and he's been schooling very well since