Sean Flanagan had never won a Grade 1 and it was on this card two years ago that Noel Meade last celebrated a top-flight winner – so it was about time the popular pair began to boogie under the bright lights. Disko arrived right on cue.

There is something serene about a grey galloping out in front and pinging every fence – Desert Orchid and One Man are just two that spring to mind – and Disko was a joy to watch as he took lengths out of Our Duke at every fence, most notably the last.

Our Duke pecked, Disko was gone. The winning margin was only a length and three-quarters but the 6-1 shot never looked like being reeled in.

Bellshill, sent off 6-5 favourite, was well beaten when coming down at the last and Might Bite was cut to 7-2 market leader (from 5-1) for the RSA Chase as a result.

Disko was made a top price of 12-1 (from 20-1) for both the 3m RSA and the 2m4f JLT Novices' Chase, with Meade suggesting the JLT was the more likely option. 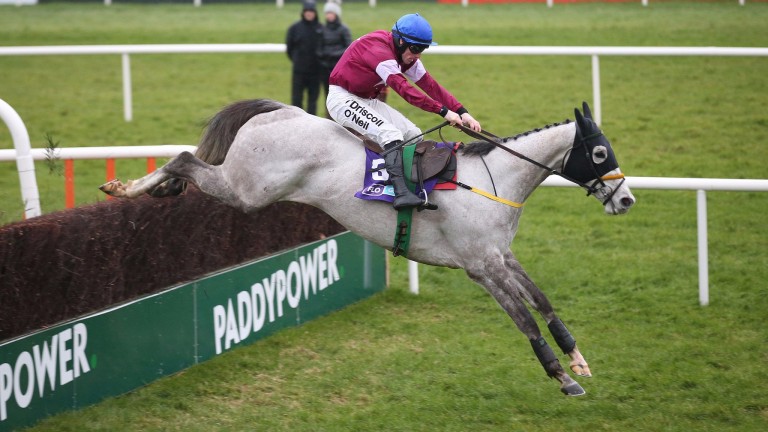 Disko: will not run at Punchestown and will instead go on his holidays
CAROLINE NORRIS

"It’s a great thrill to have one jump as well that, he was gaining ground at every fence," said a smiling Meade. "Everything seemed to be going really well and it’s lovely to be able to watch something like that.

"That two miles five might have been the trip; it seems to suit him and that’ll be the way we go I’d imagine. I’ll talk to Eddie and Michael [O'Leary of owners Gigginstown House Stud] and see what they say."

He continued: "It was the perfect ride. He jumped great for Sean and did everything right. He jumped so well he got the others in trouble.

For 28-year-old Flanagan, it was a day he had been waiting for all his life.

"It's great to get that first Grade 1 win, although it's taken me a while to get it," he laughed.

Praising his mount, the rider added: "We have always thought the world of him and he's got his jumping together, which is the main thing. He got into a great rhythm and I think that sort of trip is ideal for him."

Robbie Power, who gained consolation later on the card by winning the Irish Gold Cup on Sizing John, was not convinced the deal was done when his mount, Our Duke, sniffed the turf after jumping the last.

"I'm not so sure I was beaten – I thought I was coming back at him," said Power. "Our Duke has run a cracker and he jumped much better today. He is a lovely horse to look forward to."

Both Bellshill and Ruby Walsh seemed none the worse for their spill.

FIRST PUBLISHED 5:52PM, FEB 12 2017
It’s a great thrill to have one to jump as well that. He was gaining ground at every fence