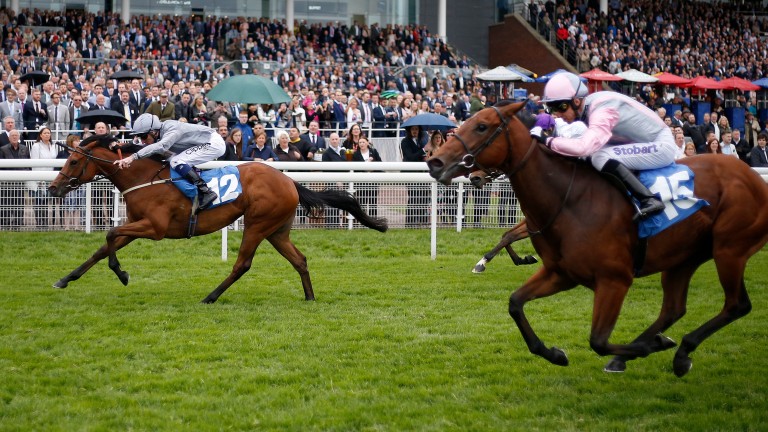 Michael Bell knows his way around speedy horses, having trained Art Connoisseur and Margot Did, so it was telling he mentioned Main Desire in the same breath as those Group 1 winners following her victory in the Listed Marygate Fillies' Stakes.

A taking debut at Nottingham in course-record time had earmarked the daughter of High Chaparral as one to follow, and she backed up that initial impression with a defeat of fellow 4-1 joint-favourite Neola.

Slow conditions blunted the pace of many of the runners, but the two market leaders were still able to pull away from the field to fight out the finish, and Bell was effusive in his praise for Main Desire.

"I haven't had a two-year-old like this, who as excited me as much, for a while," he said.

"She's gone very well at home from day one and it's very nice when you get one like this. She'll definitely be better on faster ground. That's the first time she's had to come off the bridle as we've kept the cork in the bottle at home."

Royal Ascot will be the next port of call for the winner, and she was given quotes of 5-1 (Paddy Power) and 6-1 (Betfair) for the race.

While conscious of the threat American trainer Wesley Ward could provide, having won the race for the last two years with Acapulco and Lady Aurelia, Bell is confident he has a leading contender for the race.

"She looked like a rocket from the day she arrived. The Queen Mary is obviously where we go," he said.

While Main Desire was drawn in stall nine and came over to the stands' rail, Neola was out in the centre from her berth, which jockey Graham Lee felt contributed to defeat.

"It was unfortunate from stall two I was out on my own," he said. "She had them burned off a furlong and a half down but the winner was racing away from us. She's run with massive credit."

The Queen Mary is also on the agenda of the third Mistress Of Venice, who stepped up markedly from her debut fifth.

Trainer James Given said: "We're chuffed to bits, she had no run at Beverley. She didn't act on this ground and all being well we'll have a crack at the Queen Mary."