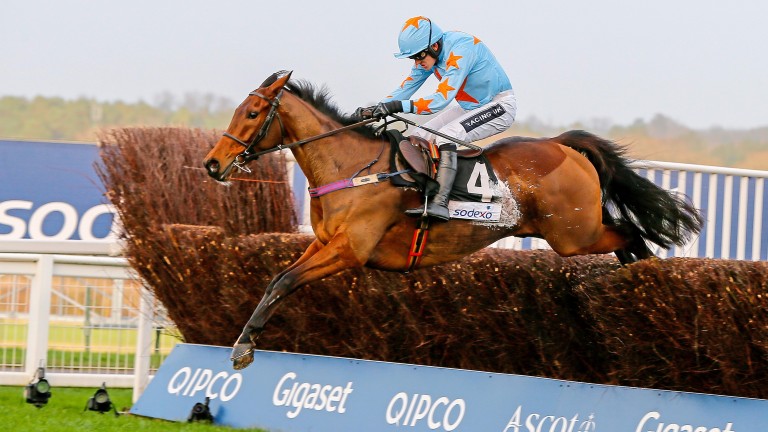 It might be a week later, at Cheltenham instead of Ascot, over a furlong shorter and with no Ar Mad around, but none of that is expected to inconvenience Un De Sceaux, who is long odds-on to defend the crown he won so emphatically 12 months ago.

This time last year Un De Sceaux was hot favourite for the Queen Mother Champion Chase. Fast forward 12 months and he heads the market for the Ryanair Chase at the festival. Stamina it seems is his new trump card and he needed to dig very deep to see off Sire De Grugy in the Tingle Creek at Sandown last month following a pair of errors at the final two fences.

It ought to be fascinating tactically, as Uxizandre, Royal Regatta, Top Gamble and especially Special Tiara all like to get on with it so the absence of Ar Mad does not mean that Un De Sceaux will get an uncontested lead.

"I'm looking forward to it. He seems to be in very good form at home anyway and he looks to have a very good chance," Ruby Walsh said. "The New course at Cheltenham is stiffer than the old one so that should suit him too.

"I know Ar Mad is missing but it is just a straight swap for Special Tiara really as he will want to be out and gone. But Un De Sceaux is a very good horse and his work at home has been good so I would be very hopeful."

Special Tiara was only a nose behind Un De Sceaux in last season's Champion Chase won by Sprinter Sacre and he returned to winning ways in the Desert Orchid Chase at Kempton, but it's worth nothing that his main market rival Sire De Grugy was an early casualty there and his performance was not particularly impressive. Any rain would certainly dampen his chances.

Uxizandre makes his belated return after 688 days. We have not seen him since that emotional final Cheltenham Festival success for Sir Anthony McCoy in the 2015 Ryanair Chase, and Alan King believes he might need this outing to blow away some cobwebs.

King said: "He has to go left-handed so it was a bonus when the race was re-opened and switched to Cheltenham. Giving AP his last winner at the festival was something very special and Uxizandre was brilliant that day, but he’s been off the best part of two years and even if he comes back as good as ever he’ll need this race to blow away the cobwebs. It's just terrific to have him back on the track."

Paul Nicholls is under no illusions either and knows that 2015 winner Dodging Bullets has plenty on his plate, saying: "He has been a bit disappointing this season and has it all to do."

Royal Regatta's best form is over further, but Philip Hobbs has thrown him into the mix.

"It looks a tough ask with Un De Sceaux and Special Tiara in there, but he deserves to take his chance. I would say the trip of two miles on this sort of ground would be his minimum these days," Hobbs said.

Kerry Lee is praying for downpours as Top Gamble is a mudlover who would come into the reckoning if it turned soft.

Lee said: "I couldn't be happier with Top Gamble. He's as well as he has been all season, we know that he likes Cheltenham and I'm hoping that the forecast rain will arrive. While this is a big step up in grade, he's a three-time Grade 2 winner. We have the utmost respect for the opposition, all six of them, but we are hopeful."