Diamond shines brightly as he beats Kitasan Black in epic 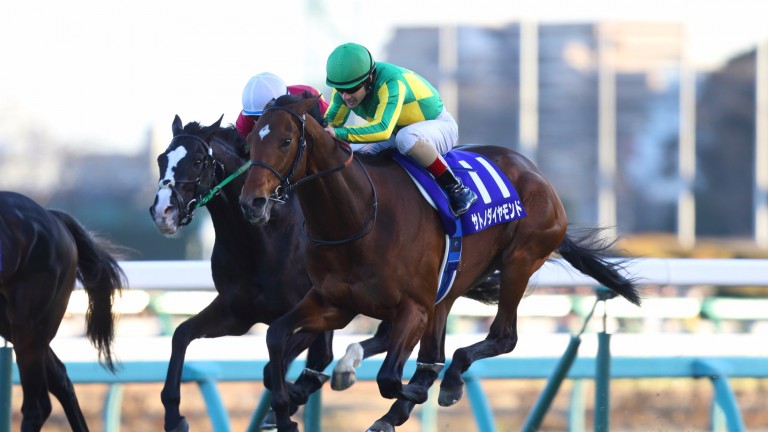 Satono Diamond and Christophe Lemaire stay on strongly to win the Arima Kinen
Masakazu Takahashi
1 of 1
By Tony McFadden 9:52AM, DEC 25 2016

Racing fans were served up an early-morning Christmas cracker on Sunday as top Japanese colts Satono Diamond and Kitasan Black fought out a thrilling finish to the prestigious Arima Kinen, with the former just getting up in the final strides to win by a neck.

The Arima Kinen is unique in that part of the field is comprised by a public vote - and the public certainly got the clash they wanted as poll-toppers Kitasan Black and Satono Diamond produced a barnstorming finish to Japan's end-of-season championship.

Single-race turnover of nearly ¥45 billion yen (around £310 million) was recorded on what is the world's biggest betting race and the bulk of that vast sum would have been staked on Kitasan Black and Satono Diamond, who were both well fancied on the back of impressive Grade 1 wins last time.

Kitasan Black's backers would have been on good terms with themselves for much of the final furlong as the Japan Cup winner had valiantly seen off a determined challenge from last year's Arima Kinen hero Gold Actor.

However, the three-year-old Satono Diamond, winner of the Japanese St Leger over 1m7f in October, stayed on powerfully down the outside under Christophe Lemaire to win for trainer Yasutoshi Ikee and confirm himself as a champion middle-distance colt.

Lemaire said: "He can be a little difficult at times but today he was able to relax when I placed him behind Kitasan Black and put in a strong finish.

"He has won the Arima Kinen as a three-year-old and he is a fine colt with a lot of talent, stamina and great potential to become a strong contender in big races next year."

It was a second Arima Kinen triumph for Lemaire who partnered Heart's Cry to a memorable success over Satono Diamond's sire Deep Impact in 2005.

"This is so thrilling for me - I won my first G1 title in the same race with Heart's Cry but I have partnered this colt, Satono Diamond, since he was still a newcomer and he's become a super horse," the rider added.

The Prix de l'Arc de Triomphe is likely to be on the winner's agenda next year and he is a general 20-1 chance to provide Japan with a much-coveted first win in the race having gone so close with the likes of El Condor Pasa, Deep Impact and Orfevre.

FIRST PUBLISHED 9:50AM, DEC 25 2016
He has won the Arima Kinen as a three-year-old and he is a fine colt with a lot of talent, stamina and great potential to become a strong contender in big races next year