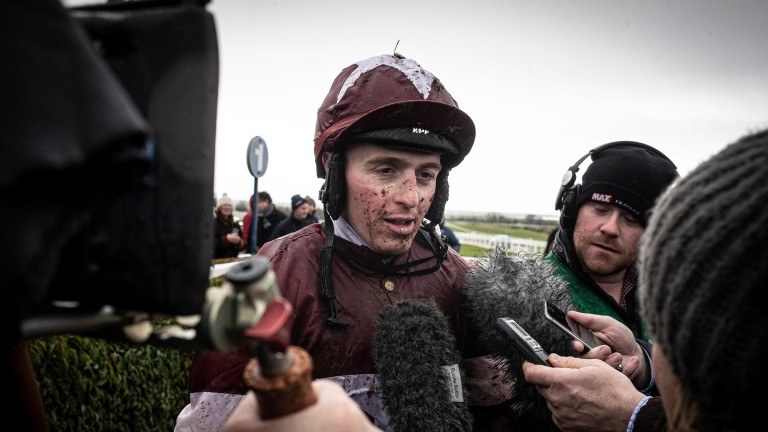 Keith Donoghue: timed his challenge to perfection on Shopping Around in the mares' handicap hurdle
Patrick McCann (racingpost.com/photos)
1 of 1
By David Jennings UPDATED 7:17PM, MAY 7 2021

There was some in-running carnage on the uphill climb to the line in a couple of contests, most notably the concluding bumper, in which newcomer Devil's Cut defied a high of 199-1 on Betfair to somehow get up in the final stride to deny Musta Lovea Lovea, who hit a low of 1.04.

The only surprising thing about that was the fact Musta Lovea Lovea did not hit the minimum price as Johnny Barry appeared to have all angles covered on the 3-1 shot when scooting five lengths clear inside the final furlong.

Hugh McOwan was one of the first to go for his whip on Devil's Cut, but the Denise Foster-trained five-year-old kept finding for pressure and got up close home to score by a neck.

There was a similar finish to the mares' handicap hurdle as Highstreet Roller hit a low of 1.11 on Betfair before being collared by Shopping Around.

Keith Donoghue timed his challenge to perfection on the 11-1 chance, who never does much when she hits the front. Her previous two wins under rules were by a neck and a head so this three-quarters-of-a-length win was a wide-margin one by her standards.

It was some nice compensation for trainer Jim Dreaper as the trainer hit the crossbar at Tipperary on Thursday evening with Thelasthighking.

FIRST PUBLISHED 6:30PM, MAY 7 2021
The only surprising thing about that was the fact that Musta Lovea Lovea did not hit the minimum price