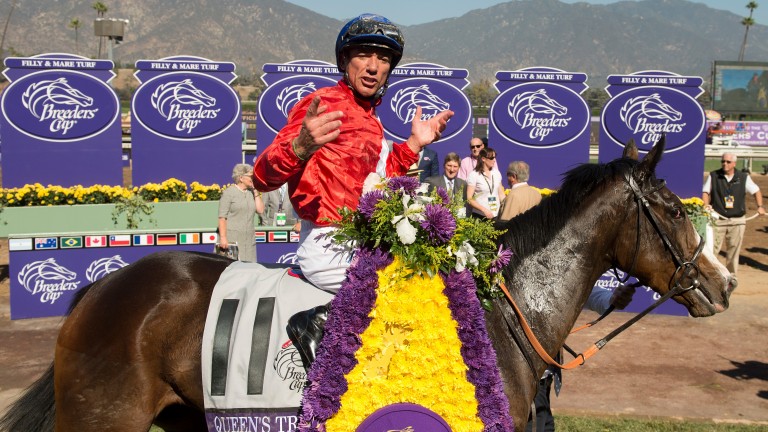 After a season dogged by trouble in running, Queen's Trust found space to show her true colours as she stormed to victory in the Filly & Mare Turf under Frankie Dettori.

Dettori immediately dedicated the win to Freddy Tylicki, who should have been riding Mehronissa for Ed Vaughan on the Santa Anita undercard, saying: "We are thinking of you, Freddy. We are praying for you pal."

This was a 12th Breeders' Cup win for Dettori, who is now the joint-fifth most successful rider at the meeting, and there was an air of expectation about Santa Anita before he delighted the crowd with a trademark flying dismount.

Tapped for pace early, the Sir Michael Stoute-trained Queen's Trust swung into the straight with only a handful of rivals behind her but, angled out by Dettori, she flew home, hitting the line neck and neck with favourite Lady Eli.

A lengthy photo finish judgement ensued, but Dettori had no doubt who had won, raising a fist in triumph as he passed the post.

The Aidan O'Brien-trained Seventh Heaven stayed on for fourth but second string Pretty Perfect, who is likely to be retired, weakened from a prominent early position to finish last.

"She's dug very deep and it's great for the team," said Dettori. "I was a little bit outpaced early but let her find her feet. When we got to the back stretch I tried to let her find a spot where I could get in a challenging position, and I was very fortunate to get behind the favourite.

"They got first jump on me in the straight and my first reaction was that I'd be a good third. Then she started to motor. It's a short straight, but those last 100 yards make a big difference and she got into top gear. We flashed past the line and I was pretty much sure we'd won."

Stoute now has seven Breeders' Cup victories, including two previous winners of the Filly & Turf, Islington in 2003 and Dank in 2013, so he knows what it takes to win at the meeting.

Nonetheless, it was an inspired decision to run Cheveley Park Stud homebred Queen's Trust. Despite finishing a good second to Minding in the Nassau, she had endured a rough campaign and been comfortably beaten on her previous two starts in the Yorkshire Oaks and British Champions Fillies & Mares.

Remarkably, the victory was her first since her debut in a maiden at Kempton in September 2015.

"She ran a great race in the Nassau," said Stoute. "She hadn't had a tough season and I thought I'd like to have a crack at this." 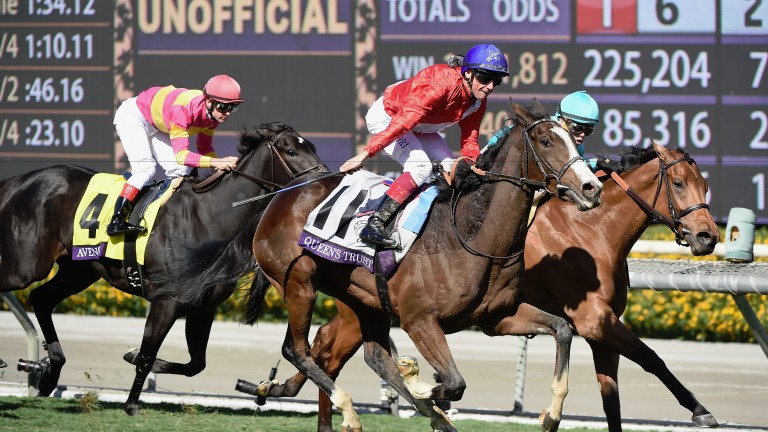 Stoute also had to persuade owners David and Patricia Thompson to have their first Breeders' Cup runner in over a decade. They had avoided the meeting since Funfair broke a leg in the 2005 Mile and had to be put down.

"I needed to persuade them and I wasn't optimistic about it, because I know their stand," Stoute said. "But fortunately they came up with an affirmative, and thank God they did."

Chris Richardson, racing manager of the Thompson's Cheveley Park operation, said the three-year-old would remain in training. "She has got a huge amount of potential," he said.

Lady Eli delivered an enormous performance on just her third run back after recovering from life-threatening laminitis, a story that has captivated US racing fans and earned her status as the miracle filly.

"Naturally I'm disappointed, but still very proud of her," said trainer Chad Brown. "Frankie rode a fabulous race and it was just two great horses down to the finish line."

FIRST PUBLISHED 8:53PM, NOV 5 2016
It's a short straight, but those last 100 yards make a big difference and she got into top gear. We flashed past the line and I was pretty much sure we'd won