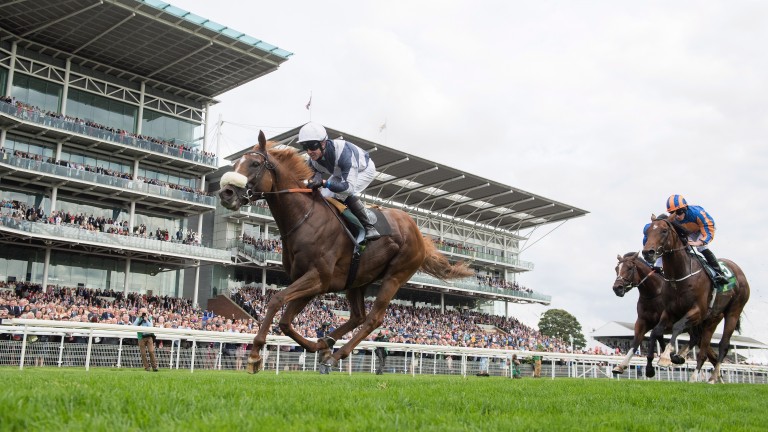 Ulysses wins the 2017 Juddmonte International ahead of Barney Roy and Churchill
Edward Whitaker
1 of 1
By Jon Lees 7:32PM, OCT 29 2017

Red-hot Frankie Dettori has come in for the ride on one Breeders' Cup favourite and lost another after it was confirmed on Sunday he would partner Ulysses at Del Mar but not Lady Aurelia, on whom he suffered an agonisingly narrow defeat in the Nunthorpe Stakes.

Although Jim Crowley has partnered Ulysses in his last five starts, winning the Coral-Eclipse and Juddmonte International this summer, Dettori is the colt's preferred rider in California on Saturday, where he will be bidding to improve on last year's fourth-place finish on the same horse in the same race. 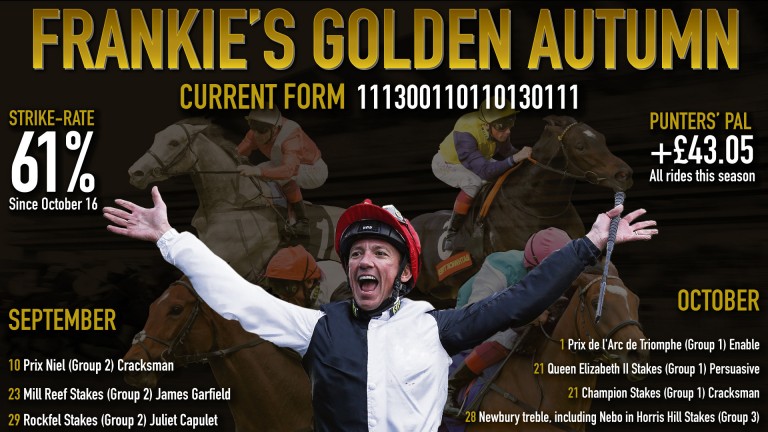 But Dettori will not get the chance to avenge Lady Aurelia's loss to Marsha at York – where he celebrated victory, only for the Sir Mark Prescott-trained runner to be declared the winner by a nose – in the Breeders' Cup Turf Sprint.

That task has been handed to John Velazquez under a previously agreed arrangement that he would ride the filly when she ran in the US and Dettori would partner her in Europe.

Dettori departs for California in a rich vein of form after a treble at Newbury on Saturday took him to 11 wins from his last 18 rides. He has never before ridden at Del Mar, where he will be hoping to add to his 12 Breeders' Cup winners.

Ulysses, third to the Dettori-ridden Enable in the Arc, is 5-2 joint favourite for the Turf with the Aidan O'Brien-trained defending champion Highland Reel.

Unless Ryan Moore had been available Dettori would have been first choice for the Sir Michael Stoute-trained Ulysses earlier this year, but he missed Royal Ascot and the Eclipse due to injury and was riding for John Gosden in the King George, International and Arc.

"Frankie is resuming his association with Ulysses," said Alan Cooper, racing manager to owners the Niarchos family. "It's very much the trainer's decision. The logic is that Frankie rode him last year. Jim is well aware of the plan. It was Michael who put Jim on the horse. There is no loss of faith in anybody."

Ulysses, who retires to Cheveley Park Stud at the end of the season, is already at Del Mar, where Prix de Diane winner Senga (Stephane Pasquier) contests the Filly & Mare Turf for the same owners.

His agent Ray Cochrane said on Sunday: "He flies over tomorrow and will ride there Wednesday and Thursday, so he will have a few spins round the track before the big days. Not many European jockeys have ridden there, that's why Flavien Prat's agent is getting him some rides beforehand."

Lady Aurelia, 5-4 favourite for the Turf Sprint, has been preparing at Wesley Ward's base in Keeneland, where the trainer, a big supporter of Dettori, said: "Johnny V rides Lady Aurelia. That was what we decided when we sat down at the beginning of year, after Johnny won at Keeneland. Frankie would ride over there and Johnny over here after he rode a beautiful race on her comeback.

"Things could have changed had Frankie been available for the first win. Unfortunately she got beat at York, but from the onset after we had dinner with [owners] Peter [Leidel] and Barbara [Banke], that's what we decided to do."

FIRST PUBLISHED 7:32PM, OCT 29 2017
Frankie is resuming is association with Ulysses. It's very much the trainer's decision. The logic is that Frankie rode him last year