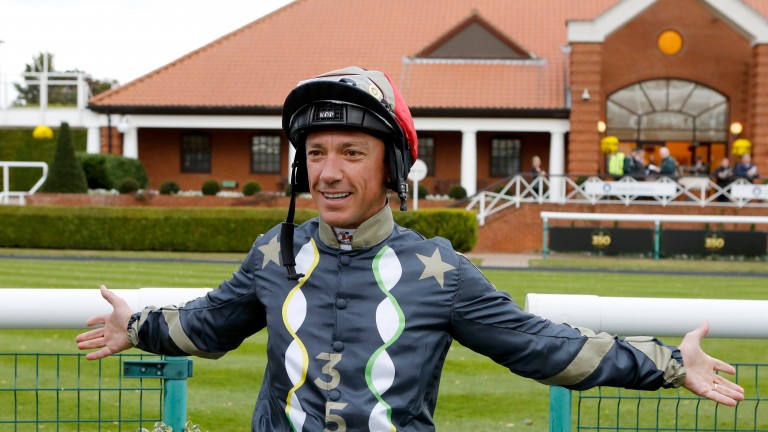 Frankie Dettori captained the Flat jockeys to victory over the jump riders in the Markel champions challenge at the Olympia Horse Show on Friday night.

Champion jockey Richard Johnson, Sam Twiston-Davies, Tom Scudamore, Harry Skelton and Victoria Pendleton made up a star-studded jumps team, who had the benefit of coaching from Nick Skelton, winner of a showjumping gold medal at the Rio Olympics. However, while they certainly had the speed, too many refusals led to their downfall.

Dettori was thrilled with his team's win after losing out two years ago. He said: “I had been riding my daughter’s pony in the run-up to the event to get my legs and all the right muscles used to it!

"It’s very hard to find the balance but I went as fast as I could without knocking stuff over."

Twiston-Davies, who parted company with his horse during the warm-up, said: “I’m pleased I stayed on in the ring – I was riding a lively horse, that’s for sure.

"We had less time to warm up than the Flat jockeys as we were away racing during the day, but fair play to them – they did very well.”

Dettori and Pendleton were the only two riders to complete a clear round and the Olympic gold medal-winning cyclist was delighted to take part in the event. She said: "It was an honour to be able to ride at Olympia and be coached by Nick Skelton. It was an amazing opportunity and all in aid of a very important cause.”

Pendleton, who finished fifth on Pacha Du Polder in the Foxhunter at Cheltenham only a year after taking up riding, has certainly caught the riding bug and currently has two of her own point-to-point horses in training.

“Racing makes me so happy, I almost feel sick I love it so much," she added. "Horses are incredible and I could never have estimated how much riding would affect me."

FIRST PUBLISHED 2:27PM, DEC 17 2016
I had been riding my daughter’s pony in the run up to the event to get my legs and all the right muscles used to it!

Everything you need to know about day one of Royal Ascot on Tuesday Royal approval: King's Lynn and Oisin Murphy going all out for Ascot Group 1 Confirmed runners and riders for the King's Stand at Royal Ascot on Tuesday Dettori adds to strong hand as he guns for third straight Royal Ascot crown Frankie Dettori in demand as Royal Ascot countdown continues 'Very vociferous' Stradivarius ready to rumble - but Gosden fears Subjectivist