Dettori: he was a joy to watch, be around and learn from 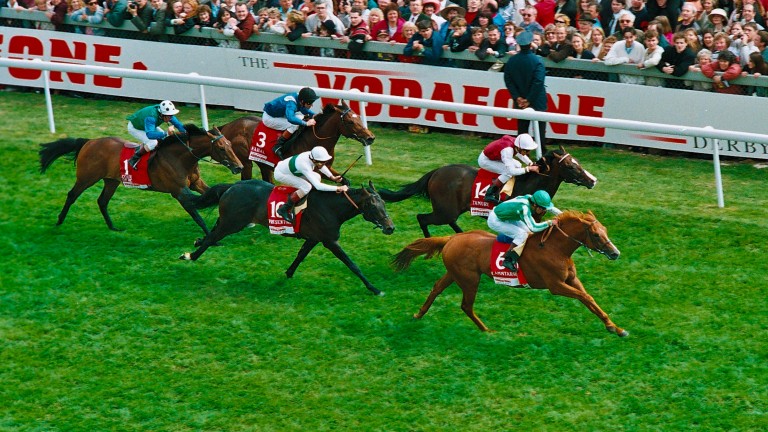 Frankie Dettori, the man who succeeded Walter Swinburn as Flat racing's most stylish operator, yesterday paid a touching tribute to his former colleague, who died at the age of 55 on Monday morning.

Swinburn, who suffered from epilepsy, was one of the finest riders of his generation and his CV is crammed with victories in many of the sport's greatest races.

He won eight British Classics and memorably steered Shergar to his brilliant win in the 1981 Derby when the jockey was just 19.

By the time Dettori entered the weighing room in the late 1980s, Swinburn was established as one of its senior members and he was fondly recalled on Tuesday by his old sparring partner.

Dettori said: "Walter was in my corner. I got changed next to him almost every day and as a young lad growing up he was a jockey I looked up to because he was an unbelievable rider. He was a joy to watch, be around and learn from. It was a sad day when I heard the news. He was only 55 and I'm still in a bit of shock as it's so young."

Outlining the part Swinburn played in helping shape his successful career, the 45-year-old added: "Absolutely I took things from him, of course. And I was blessed he was in my corner so I watched him like a hawk every day, trying to pick up his best attributes. He definitely played a big part in my career.

"He was a very natural talent and got inside horses's mind to get them to do what he wanted them to do; relax, run for him. He was a great horseman. For me as a young, up-and-coming jockey he was someone I was very lucky to have on my side, so I could try to pick up as much as I could from this great talent.

"When you're with someone – and I was very lucky I had Walter, Ray Cochrane and Pat Eddery to look up to – for six to eight hours a day you pick up things even if you don't actually talk to them or ask; you're like a sponge and try to be like them.

"When I rode the seven winners at Ascot he was with me all day, him and Pat, and he was the one pushing me to win the seventh, saying, 'You can win this'. He was getting me revved up.

"I spent a lot of time with him and shared many journeys with him and he was always fun to be around. We had some great times, on and off the track."

Many of Swinburn's major triumphs came on horses owned by members of the Maktoum family, most notably brilliant miler Zilzal and Lammtarra, who won the Derby in 1995.

John Ferguson, Sheikh Mohammed's long-time bloodstock adviser and now chief executive of Godolphin, was close to Swinburn and said: "Walter was a very special friend and godfather to my daughter Georgina.

"James Fanshawe, Walter and I were all working at Sir Michael Stoute's at the time and were an incredibly close team. Our thoughts are with Wally and Doreen and the Swinburn family.

"Walter was the ultimate horseman and rode many, many great victories for the Maktoum family and others and he'll be greatly missed."

"I'm very said," she said. "He was someone I was very fond of and we had a lot of success together; he rode Hatoof in all of her big races. He was fantastic, one of the greatest jockeys I ever worked with. He was very talented and very good with two-year-olds - he was a real horseman. For me he was up there with the best."

Those words were echoed by Aidan O'Brien, whose first Group 1 winner, Desert King in the National Stakes in 1996, was ridden by Swinburn.

O'Brien said: "We always considered Walter an incredibly special rider. He sat as light as a feather on a horse and his timing was always brilliant. When we could use him we did, and he was an absolute gentleman to deal with. He rode our first Group 1 winner 20 years ago and also rode our first Phoenix Stakes winner, Lavery, at Leopardstown in 1998.

"He was very thoughtful of others as his walk from Cork to Dublin in 1997 to raise funds for different charities showed. Our thoughts and sympathies are with his family at this sad time."

Dermot Weld, multiple champion trainer in Ireland, said: "Walter was not only a world-class jockey, he was an exceptionally nice person. I knew him since he was a child as his father Wally was my stable jockey in the 1970s and was twice champion jockey in Ireland.

"Walter didn't ride for me very often but he did ride a couple of big-race winners for the yard, Vintage Crop in the 1992 Cesarewitch at Newmarket and Saving Mercy in the 1984 Lincoln.

"He was a very gifted athlete and those hands which he became famous for as a jockey were seen to very good effect when he was a schoolboy at Rockwell College where he made a name for himself as an excellent scrum-half on the college rugby team.

"His death at only 55 is tragic and my deepest sympathies go to his parents, Wally and Doreen, and his brother Michael."

Friends and colleagues reflect on a sad loss

He was a hugely talented man with fantastic hands – lovely, quiet hands. Horses settled for him and he was a great talent. I think his ride on Lammtarra, a maiden winner in the Derby, was a phenomenal achievement as he managed an inexperienced horse around Epsom. That was one of his outstanding achievements and he definitely had ice in his veins on the big days – nothing seemed to bother him.

He had an amazing career. The thing with Walter he was so talented it almost looked like he didn’t have to put any effort into it. I envied him as a rider because he was a beautiful horsemen with a relaxed style. You can learn to ride but there are some things that can’t be learned and Walter was one of those guys who had that magic touch about him. That’s why Michael Stoute loved him. No matter how badly he behaved – and sometimes he did – he was so talented that all the trainers wanted him to ride for them. On the big day there was nobody better – he was very cool, calm and collected and got the best out of a horse. He was a good fellow and a nice guy.

Very sad to hear about the death of Walter Swinburn. Brilliantly stylish and a genius in the saddle. A jockey that God hath retained. RIP

Shocking and sobering news of Walter Swinbur,n the owner of talent that most jockeys can only dream of. RIP Wally

Sad news to hear Walter Swinburn has passed away – a natural talent, incredible balance, hands, judgement of pace and a joy to watch.

Very sad to hear the news of Walter Swinburn's passing. My thoughts are with his family and friends at this time.

Shocked and saddened to hear of the passing of Walter Swinburn. RIP.

FIRST PUBLISHED 3:04PM, DEC 13 2016
When I rode the seven winners at Ascot he was with me all day and he was pushing me to win the seventh, saying: you can win this. He was getting me revved up