Dettori excels in Ormonde shootout between Western and Ranger 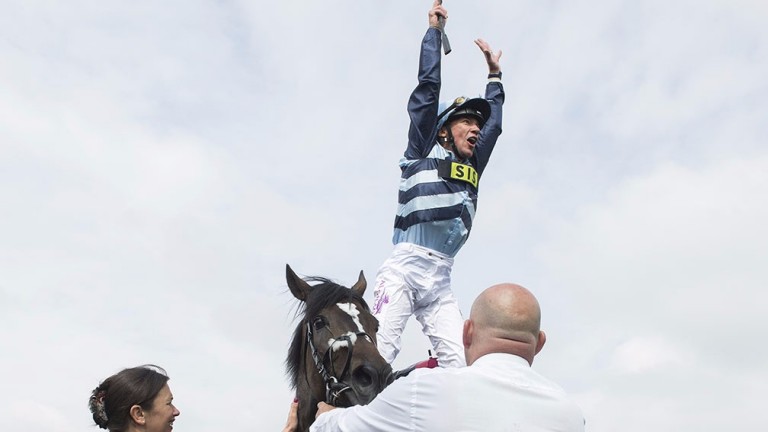 It was always going to take something out of the ordinary to stop the Ballydoyle bandwagon rolling on and Frankie Dettori produced it when getting the notoriously quirky Western Hymn up to edge out US Army Ranger by a short head in the Boodles Diamond Ormonde Stakes.

The top jockey described the John Gosden-trained six-year-old as "a challenge to ride" and he was forced to draw on his years of experience to fill in a rare blank on his glittering CV with a first victory in the Group 3.

"He's a very hard horse to gauge because he hits a flat spot but if you get there too early he stops," said Dettori. "I thought I'd timed it just about right and on the line he hit the brakes and gave Ryan [Moore] a chance to come back."

There were echoes of Wednesday's Cheshire Oaks when Dettori and Gosden combined with Enable to prevent an Aidan O'Brien victory, and if it weren't for the pair the Ballydoyle trainer would have landed a clean sweep of Group/Listed races over the three days of the meeting.

Paddy Power cut Western Hymn to 12-1 (from 16) for next month's Hardwicke Stakes at Royal Ascot but a return to his favourite course could be the next port of call.

"He's an old character and will probably go for the Brigadier Gerard as he likes Sandown," said Dettori, who rode a double for Gosden when winning the 7f fillies' maiden on Gymnaste.

Connections of US Army Ranger, winner of last year's MBNA Chester Vase before finishing second in the Investec Derby, were left to reflect on an improved performance following an anticlimactic period since Epsom.

Kevin Buckley, Coolmore's UK representative: "He didn't do much wrong. It was a step up in trip and he appreciated that. We knew he'd handle Chester from last year and we've been beaten by a good horse. He's not the finished article yet and he has plenty of options."

Rain through the day eased the ground, though not enough for some who'd been declared on Wednesday in expectation of heavy downpours.

It was certainly reckoned to have helped course specialist Sound Advice, who had only two rivals behind him turning for home in the 7½f handicap but got up in the final furlong for a length-and-a-quarter win.

"The rain is just getting in a bit and they have gone hard up front," said jockey Dougie Costello.

"On the first couple of days being up with the pace was the place to be but the rain helped me and my lad finished well."

The eight-year-old was scoring his fourth Chester victory on just his sixth trip down from Keith Dalgleish's Scottish yard.

"He goes really well here and I think it's because it keeps him interested, there aren't any long straights and there are lots of turns – sometimes he can switch off a bit," added Costello.

"Keith said he could well come back for the next meeting on May 27."

As an insolvency practitioner, Halifax-based owner Anthony Denham is an expert on finances and he was in the black after the recent purchase of Copper Knight paid instant reward in the £30,000 5f handicap.

Winner of the Lily Agnes at the meeting last year for Hugo Palmer, the three-year-old in now in the care of Tim Easterby, having been bought for 5,000gns by the trainer's son William.

Impressed with his first run for the new yard at Ripon last month, Denham and his father Keith acquired Copper Knight having completed the paperwork just five days earlier.

"We had to pay a little extra but it wasn't too bad and he's certainly paid for himself there," said Denham. "He's won round Chester before and seems to be getting faster."

What a week it was for dam Marlinka, who was responsible for last Saturday's Palace House winner Marsha and Judicial, who landed the 5f conditions stakes for trainer Julie Camacho. The pair are owned by Elite Racing Club.

The first rain of the week may not have been welcomed by many but it showed the value of the new perspex canopy in the winner's enclosure, keeping the presentation parties and television crews safely dry.

It is widely accepted Chester is one of the hardest tracks to ride, so the jockeys deserve great credit for the fact the stewards did not hand out a single ban throughout the three days.

FIRST PUBLISHED 6:18PM, MAY 12 2017
I thought I'd timed it just about right and on the line he hit the brakes and gave Ryan [Moore] a chance to come back

Everything you need to know about day one of Royal Ascot on Tuesday Royal approval: King's Lynn and Oisin Murphy going all out for Ascot Group 1 Confirmed runners and riders for the King's Stand at Royal Ascot on Tuesday Dettori adds to strong hand as he guns for third straight Royal Ascot crown Frankie Dettori in demand as Royal Ascot countdown continues 'Very vociferous' Stradivarius ready to rumble - but Gosden fears Subjectivist