Dettori back on Cracksman as Champion Stakes challenge looms 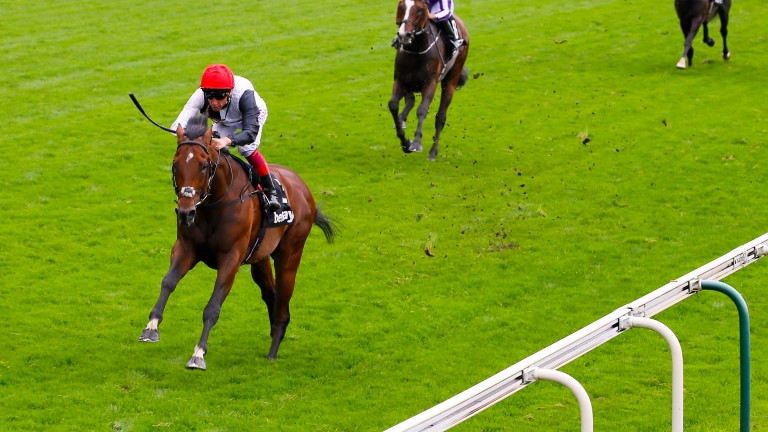 Cracksman: impressed on the Limekilns round gallop
Mark Cranham
1 of 1
By David Milnes UPDATED 6:52PM, OCT 11 2017

Cracksman John Gosden
Robert Havlin had to relinquish the ride on the Qipco Champion Stakes contender to Frankie Dettori and set the pair a stern test on a winning three-year-old lead horse on the Limekilns round gallop. Gosden will give Cracksman another spin on the famous dry weather facility at the weekend in preparation for his drop in trip at Ascot.

Fidaawy Sir Michael Stoute
Former jockey JD Smith partnered the chestnut, who worked well at the weekend to suggest he will take plenty of stopping in Saturday's Darley Club Stakes at Newmarket.

Ghaiyyath Charlie Appleby
Frankel's former workrider Shane Fetherstonhaugh had the hammer down on the son of Dubawi who ran out a smart six-length winner on the Rowley Mile last month. The youngster may head back to Newmarket on Saturday for the Group 3 Autumn Stakes which is sponsored by his owners Godolphin or the Group 1 Racing Post Trophy at Doncaster on October 28.

Fondest James Fanshawe
Fanshawe is becoming the new Clive Brittain with his early starts but the daughter of Mayson shone a light through the gloom on the Limekilns long gallop. It's no surprise the youngster can go a bit as she is a half-sister to Jeremy Noseda's classy performer Keystroke.

Great Work !!! Alternative Fact Ed Dunlop
Gerald Mosse was a rare sight among the La Grange ranks on the long gallop on Tuesday morning when he steered a path clear of an older lead horse on the impressive Salisbury winner. The son of Dalakhani is top of the juvenile pecking order along the Fordham Road and could be a good each way prospect in the Group 3  Autumn Stakes at Newmarket on Saturday.

FIRST PUBLISHED 11:26AM, OCT 11 2017
Gerald Mosse was a rare sight among the La Grange ranks on the long gallop on Tuesday morning