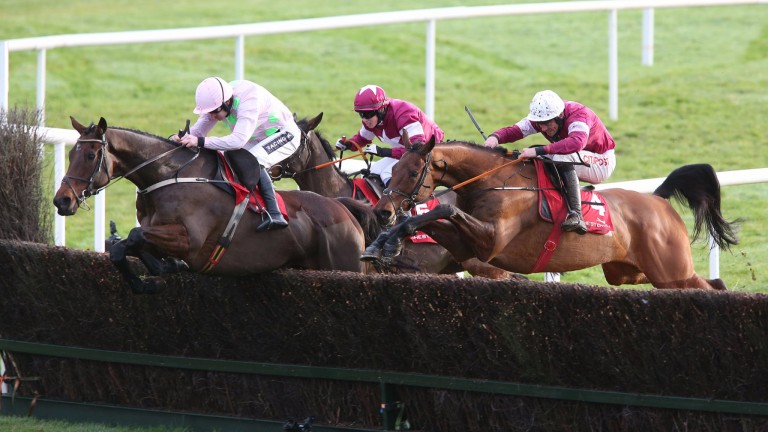 Djakadam and Ruby Walsh fend off the challenge of Outlander (white cap) and Sub Lieutenant
CAROLINE NORRIS
1 of 1
By Tony O'Hehir 1:08PM, DEC 13 2016

Djakadam became only the second dual winner of the John Durkan Memorial Chase, and the first back-to-back scorer, when getting the better of former stablemate Outlander in the Grade 1 highlight at Punchestown on Sunday.

Native Upmanship, in 2000 and 2002, was the only previous dual winner of the two-and-a-half-mile contest, and Djakadam – runner-up in the last two Cheltenham Gold Cups – was giving trainer Willie Mullins his fourth win in the race and Ruby Walsh his third.

Racing over a trip short of his best, Djakadam jumped well apart from the seventh fence and dug deep to see off the attentions of the Gigginstown House Stud-owned pair Outlander and Sub Lieutenant in the closing stages.

A number of bookmakers trimmed Djakadam to 8-1 (from 10) for the Timico Cheltenham Gold Cup, with the market headed by Thistlecrack at 7-2.

Before dashing off to watch Douvan's successful reappearance at Cork on the television, Mullins, who was to have four winners here and six on the day, said: "That was a good effort first time out. It was good to see him finding a leg when he made that bad mistake at the downhill fence but overall his jumping was very good.

"We hadn't made a plan for him beyond today but I'd imagine we'll be looking at some to the top staying chases, including giving him another tilt at the Cheltenham Gold Cup."

Walsh said: "It was a good performance, bar the one mistake, to win the race for the second year running. In Outlander and Sub Lieutenant, he beat two horses who were race-fit, whereas Djakadam was having his first run of the season."

"We thought our fellow had come on since his last run and, hopefully, there'll be a big one to be won with him somewhere down the line."

Sub Lieutenant's trainer, Henry de Bromhead, said: "It was a very good effort and, after making the running, he was staying on again from the final fence.

"I'm not sure about plans but maybe the Kinloch Brae Chase at Thurles next month."

FIRST PUBLISHED 2:26PM, DEC 11 2016
It was a good performance, bar the one mistake, to win the race for the second year running