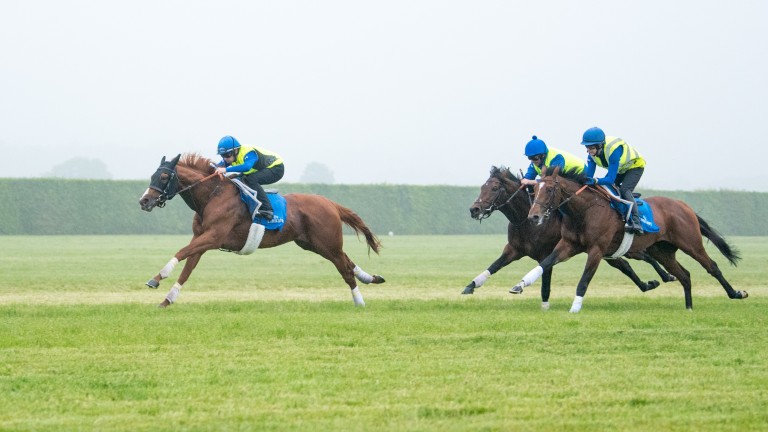 Masar ran in four different countries in the space of nine months prior to his Investec Derby triumph so it is fitting that he is ridden at home by jockey Brett Doyle who is almost as cosmopolitan as the horse himself.

The 45-year-old has always been well placed to take up a job with Charlie Appleby at Moulton Paddocks as he owns a house in the neighbouring village of Moulton that he used to rent out until his wanderlust ended last year.

Doyle, who rode Group 1 winners domestically in the 1990s, has spent much of the last 15 years riding successfully in Hong Kong and Bahrain until deciding to don the blue jacket a year ago. One of the first horses he rode when making the short commute to the 1,300 acre complex was, funnily enough, Masar himself, and he's ridden the chestnut every day since, even following him to Dubai in the winter.

Reflecting on Saturday's Derby triumph, he said: "I wasn't surprised by Masar's win as he'd been going very well at home but it still takes some taking in. I rode in the Derby a couple of times myself but finished nearer the back than the front as I remember but Saturday was fantastic for the team."

He added: "I've been riding Masar for over a year and even rode him out in Dubai through the winter. I knew he was in the form of his life before Epsom and he'd actually put on weight since the 2,000 Guineas. He's bred to stay a mile and a half but you always have that concern as he shows so much speed. Luckily he's got both."

A drop back in trip for the Eclipse would not faze the son of New Approach according to Doyle, who said: "Masar has pace enough for seven furlongs so there would be no problems dropping back in trip. He has loads of pace. He's the full article."

FIRST PUBLISHED 3:35PM, JUN 4 2018
There would be no problems dropping back in trip. He has loads of pace. He's the full article