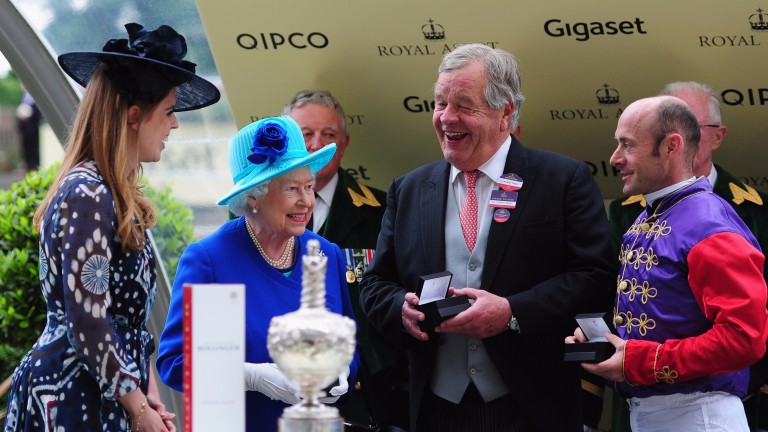 Sir Michael Stoute has been the dominant force in the Hardwicke Stakes, winning the race on ten occasions, including a remarkable seven times since 2006. Punters and royalists will be hoping he strikes again

The Hardwicke Stakes provided one of the most memorable moments of last year's meeting when Dartmouth won for the Queen, getting the better of Highland Reel in a thrilling battle, and hopes are high that Her Majesty's representative will be able to retain his crown.

Dartmouth showed a teak-tough attitude to triumph – with Highland Reel since advertising the form in no uncertain terms, winning four Group 1 races, including the Prince of Wales's Stakes – and Stoute's star again looked willing in the finish when narrowly getting up to land the Yorkshire Cup over 1m6f on his return.

"Dartmouth is an extraordinary horse who is so dependable and always tries his best," said John Warren, racing manager to the Queen. "Sir Michael [Stoute, trainer] has trained him brilliantly throughout his career and tells us that he's very happy with his wellbeing going into the race. The Queen is very much looking forward to seeing him run."

Sir Michael Stoute has a useful second string in Across The Stars, who like Dartmouth was successful at last year's meeting. The King Edward VII Stakes winner was slightly disappointing on his seasonal reappearance at Newbury, but better is expected with the benefit of that outing under his belt.

Bruce Raymond, racing manager to owner Saeed Suhail, said: "He's in good shape. The ground was a bit too soft for him at Newbury and he was a bit fresh, but he's been settled in his work since and won over course and distance last year, so we're hopeful."

Will the weather scupper My Dream Boat plans?

My Dream Boat won the Prince of Wales's Stakes last year, but is unlikely to have another shot at royal glory with ground conditions faster than ideal.

"He's a doubtful runner unless it rains - when we declared him on Thursday they were forecast rain, which unfortunately didn't arrive," said trainer Clive Cox.

"If he does run what I can say is that he's in very good form, his run at Newbury last time was a step in the right direction, and this is a track he obviously likes," Cox added.

Change of fortune for Idaho?

Idaho, who finished placed in both the Epsom and Irish Derby last season, has endured his fair share of bad luck, which possibly explains why he has only two wins to his name and just one Group-race victory on his CV.

An impressive winner of the Great Voltigeur Stakes, Idaho was sent off at odds-on for the the St Leger, but stumbled and unseated his rider three furlongs out, while he had to pass the vet before finishing sixth on his seasonal reappearance in the Coronation Cup after arriving late at the track due to a delayed journey.

As a brother to Highland Reel there is the possibility Idaho will improve with age, and trainer Aidan O'Brien is hopeful of a bold show. He said: "His run in the Coronation Cup was his first of the season and we think he's progressed since Epsom. He showed good form last year and we're happy with him."

James Fanshawe, trainer of Arthenus
He's very well but rain would help. It's his first start over a mile and a half but he gives the indication it would suit.

Roger Varian, trainer of Barsanti
Barsanti produced his usual gallant performance when running third on his reappearance at Goodwood and I feel he's stepped forward for the run. This is a big ask from a wide draw, but he might not have finished improving just yet.

William Haggas, trainer of Dal Harraild
He’s in good order. I’m not sure we’re doing the right thing dropping him back to a mile and a half, but he needs a race before the Goodwood Cup and he’s at his best on fast ground.

John Gosden, trainer of Muntahaa, Western Hymn and Wings Of Desire
Muntahaa was unhappy on the soft ground at York and should be better back on a quicker surface on which he has won previously at Newbury. Western Hymn was given the ride of the year when winning at Chester but could do with one of these showers they say are around to take the sting out of the ground. That also applies to Wings Of Desire who comes here a fresh horse having missed his intended prep in the Brigadier Gerard Stakes at Sandown.

Saeed Bin Suroor, trainer of Prize Money
Prize Money ran well out in Dubai, winning the Dubai City Of Gold, but was disappointing on his latest start in the Coronation Cup. He came out of that race in good form and his last piece of work went well. I'm looking for a better run from him.

Roger Charlton, trainer of Second Step
His win at Goodwood was a nice confidence-builder and he's been in good form since. This is a more competitive race, though, and he may be better at tracks with a longer straight.

FIRST PUBLISHED 6:00PM, JUN 23 2017
Dartmouth is an extraordinary horse who is so dependable and always tries his best