Talk of the Tracks WOLVERHAMPTON

Delight for punters as Harley motors in with four-timer 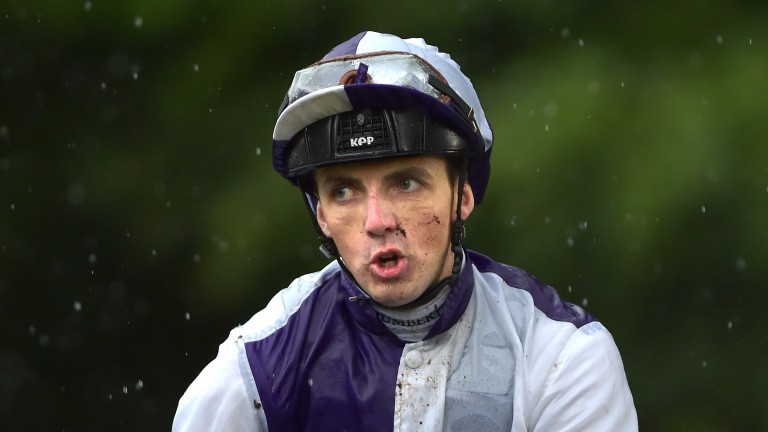 There must be something in the air at Dunstall Park that gets Martin Harley going as on Wednesday he rode his second four-timer at the same venue as his first.

The freelance jockey, who was repeating a feat he managed in December 2013, struck four times at combined odds of 35.5-1 with a riding performance that lit up a grey day and added to his excellent end to the year.

The four-time Group 1 winner has built up a profitable partnership with the David Simcock-trained Sheikhzayedroad this year, ending the campaign with victories in the Doncaster Cup and Long Distance Cup on Champions Day.

"I'm grateful to David for giving me the leg-up on Sheikhzayedroad and things have been going well for me," said Harley, whose fourth success of the afternoon came courtesy of Simcock's Nonios in the 1m1½f handicap.

All four of Harley's winners returned as favourite and it was the shortest of those, 4-11 shot Zumurudee, who had the jockey most excited following a ten-length romp in the first division of the 1m½f maiden.

"He's above average and he's not finished improving yet," said Harley. "That was impressive - I thought he would do that as he put in a solid display at Nottingham last time and gave me a good feel."

Sporting the colours of Sheikh Mohammed Bin Khalifa Al Maktoum, the Marco Botti-trained colt might have been reluctant to load but he grabbed the lead early on and left his rivals trailing in the home straight.

Harley, who got the ball rolling on Geraldine in the 6f nursery, adopted similar prominent tactics on Flower Of Love in the 1m4f fillies' handicap to extend trainer Simon Crisford's excellent strike-rate at the course to 34 per cent.

X Rated may not have displayed similar traits to his half-sister Lumiere as a juvenile but he finally got the reward he deserved to break his maiden tag.

The eye was drawn to John Gosden newcomer Oxford Thinking, who holds an entry for the Derby but could finish only fourth. The Mark Johnston-trained 11-8 favourite set the standard on form and made all under Joe Fanning.

"He's a different type of horse to Lumiere in that he's not precocious and he'll be one for next year," said the trainer's son Charlie. "But it's pleasing he's got the job done as he was the best horse going into the race and he proved it."

Fanning was back in the winner's enclosure in the following fillies' maiden after getting a fine tune out of the Brian Meehan-trained Princess Nia.

"She was having a good look about and hopefully there's a bit of improvement next year when you'd imagine she could go up in trip," said the jockey.

Martin Harley might have been expected to do well with a good book of rides but his uncomplicated style at a track where it pays to be up with the pace was a joy to behold.

FIRST PUBLISHED 6:03PM, NOV 23 2016
He's above average and he's not finished improving yet