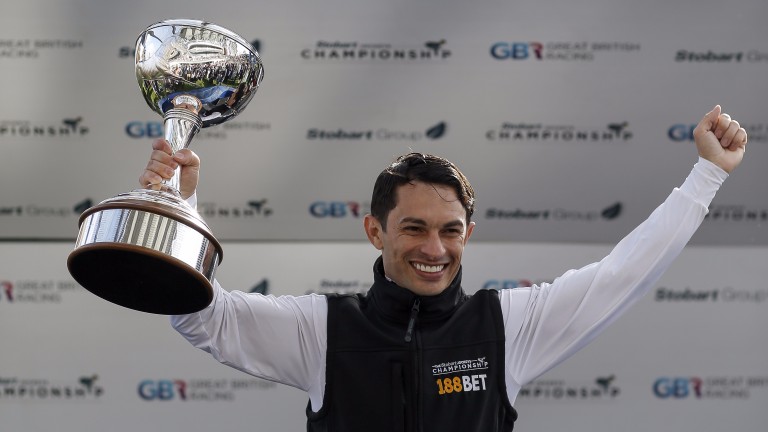 Silvestre de Sousa had his moment in the Ascot spotlight as he picked up the trophy that confirmed he is once again Britain's Stobart Champion Flat jockey.

Having come off second best following Jim Crowley's remarkable  charge to the title in 2016, De Sousa had his foot to the floor throughout this season and has long been out of sight as he chased a second title.

"It was my target, I'm delighted to get there," said De Sousa. "I'm very proud to win for a second time, I've worked very hard, it is great."

On a historic day for trainer Aidan O'Brien, he was also crowned Britain's champion trainer following a season that saw him claim all but one of Britain's five Classics, with only the mighty Enable preventing him from a clean sweep.

The trainers' title is decided on prize-money and runs through the entirety of the calendar year, but at the request of the National Trainers Federation, and with O'Brien almost £3 million clear of his closest rival John Gosden, the presentation was made on Saturday.

Godolphin retained their champion owner title, with their £5,241,602 earned putting them comfortably clear of great rival the Coolmore syndicate of Derrick Smith, John Magnier and Michael Tabor. Coolmore syndicates are registered separately with Weatherbys and therefore treated as separate entities.