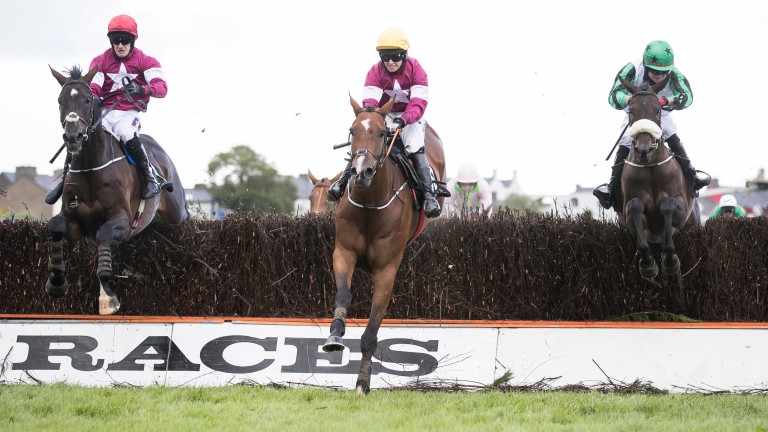 Just like last year it was Lisa O'Neill who lit up Listowel. However, this time it was Potters Point, instead of Wrath Of Titans, who triumphed in the Guinness Kerry National for last year's winning connections of O'Neill, Gordon Elliott and Gigginstown House Stud.

Potters Point, an 8-1 shot, prevailed by half a length from Arkwrisht, another of the Gigginstown team, with Bay Of Freedom three-quarters of a length back in third in the 56th running of the three-mile event under Guinness sponsorship.

O'Neill's victory aboard Wrath Of Titans 12 months ago was a landmark win for the amateur rider who went on to achieve Cheltenham Festival glory in March when partnering Tiger Roll in the National Hunt Chase.

And after Wednesday's win she said: "It was a massive surprise to win this race last year and I was delighted to get the opportunity to ride Potters Point today. I'm very grateful to Gordon and Gigginstown for giving me the chance.

"It's unbelievable to win such a big race two years in a row. I'm a bit of a pessimist, so I was just glad to be involved again and wasn't in any way confident.

"Potters Point took me into the race and we probably got to the front a bit early. He reached for the second-last and landed running, so we set sail. He was clever at the last and kept going."

'Huge part of the team'

O'Neill, who last year joined Katie Walsh as the only female riders to win the prestigious prize, is a multi-tasked member of Elliott's team, combining driving the horse box, riding out, pre-training and working in the office. And Elliott clearly values her highly.

He said: "Lisa is a huge part of our team and as a rider she's as plucky as they come. She gave Potters Point a super ride. I told her to ride him ahead of mid-division and to let him enjoy himself.

"She probably got there plenty soon enough but the horse kept finding for her on the run-in.

"Michael [O'Leary, of Gigginstown] was very keen that Lisa rode the horse. She was his pick and he had full faith in her. I was very worried about the very heavy ground for him but it all worked out well."

Elliott believes the winner, a seven-year-old, will make up into a Grand National horse in time, but other big-money handicaps are likely to be on the agenda for the son of Robin Des Champs in the more immediate future.

"We'll enjoy this win and then think about plans. I'd imagine we'll look at maybe the Munster National and the Troytown for him. Potters Point had a wind operation before he won for the first time over fences at Fairyhouse in April and it seems to have worked," Elliott said.

Arkwrisht, trained by Joseph O'Brien, made the winner fight all the way to the line after making a mistake three-out before rider Andrew Ring lost an iron at the second-last.

The Fergal O'Brien-trained Viva Steve fared best of the two British challengers in fourth, while Colin Tizzard's Tempestatefloresco was struggling before halfway and was eventually pulled up. Nine of the 18 starters were pulled up in the testing ground.

A Toi Phil, a Gigginstown-owned stablemate of the winner who was sent off 6-1 co-favourite with Arbre De Vie, finished fifth under Davy Russell. Arbre De Vie weakened from the second-last and finished seventh.