James Doyle is able to steal a look back aboard Blue Point in the King's Stand
Edward Whitaker / racingpost.com/photos
1 of 1
By David Carr UPDATED 6:39PM, JUN 18 2019

Same winner, same second but different jockey – and different horse too, if those closest to top-notch sprinter Blue Point are to be believed.

Yet teamwork was the key to this back-to-back King's Stand Stakes triumph. The team behind the scenes at Godolphin doing their thing to get the best out of a blisteringly quick horse for whom things had not gone so well after success here in 2018.

And the teamwork of the weighing room, with William Buick looking on from the sidelines as his friend James Doyle guided the speedy five-year-old to another defeat of Battaash – though Mabs Cross was just pipped for third by Soldier's Call to prevent a total repeat of last year's result.

Buick is out of action with post head-injury syndrome sustained after falling from a horse on the way to the start here last month. He was one of the first to congratulate his stand-in and admitted: "Of course you want to be doing your job. I'm not but the team are doing very well, which is the most important thing.

"You want everything to go right and James gave him a beautiful ride, very uncomplicated – he let the horse run his race and he did the same as last year. When he hit the rising ground he saw off Battaash."

Doyle had not ridden Blue Point since he finished fourth in the Sprint Cup at Haydock in 2017 and said: "It must be very difficult for William to be here watching these good horses perform so well but I guess it would soften the blow that he knows that his best mate is riding them.

"He was one of the first over to me, giving me a hug. He'll be back soon and that's the main thing."

Blue Point has very much been back this year and was making it four out of four in 2019 after three wins in Dubai.

"For the last couple of years we've had to try to bottle his energy and make sure he produced it at the right time but during the winter he was mentally and physically maturing," said trainer Charlie Appleby. "The team at home have done a fantastic job looking after this horse.

"He's strengthened up and when William got off him after his first start in Dubai he said this was a different animal we were dealing with – he's the finished article.

"I'm so blessed to have a great team around me. It's a great team effort to get him here in such good condition." 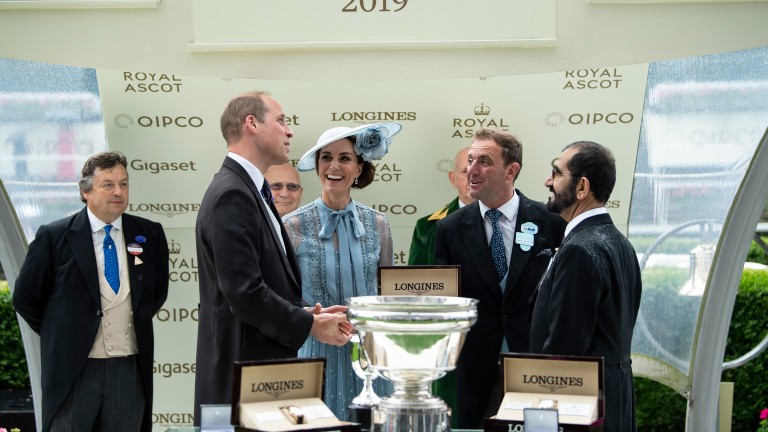 Not even Godolphin can change the weather and steady rain on the day had raised a slight worry.

"I was a bit concerned about the ground but it can rain as much as it likes now!" Appleby said. "Like any good athlete, we don't want him to slog around in slower conditions but I felt he was in the condition of his life."

Winning owner Sheikh Mohammed said: "That has given me a lot of pleasure. When you win a Group One, you are very happy. Blue Point was in Dubai during the winter and the weather there helped him. He came here a stronger horse.

Battaash will bid for a repeat victory in the King George Stakes at Goodwood, with Charlie Hills reckoning he was outstayed by the winner over this stiff 5f.

But Houtzen had a luckless experience, travelling all the way from Australia only to stumble at the start. Kerrin McEvoy did well to stay on board and his mount's final finishing position of eighth – having recovered quickly and shown plenty of pace – hinted at what might have been.

Bad luck for Houtzen knuckling badly at start of the King’s Stand. Good job by @KPMcEvoy to keep her upright.. #gallantfilly pic.twitter.com/E5M43OrQxc

Joan Of Arc sparkles in France but this Prix de Diane was frustrating to watch 'Some people wouldn't accept what we did, but it was all for the good of horses' Gavin Cromwell planning Breeders' Cup date for Queen Mary star Quick Suzy How Ascot put on the most marvellous meeting - despite losing millions 'There are no negatives' – 35-race Royal Ascot is a permanent fixture 'Indistinguishable handicaps are not enhancing the royal meeting'