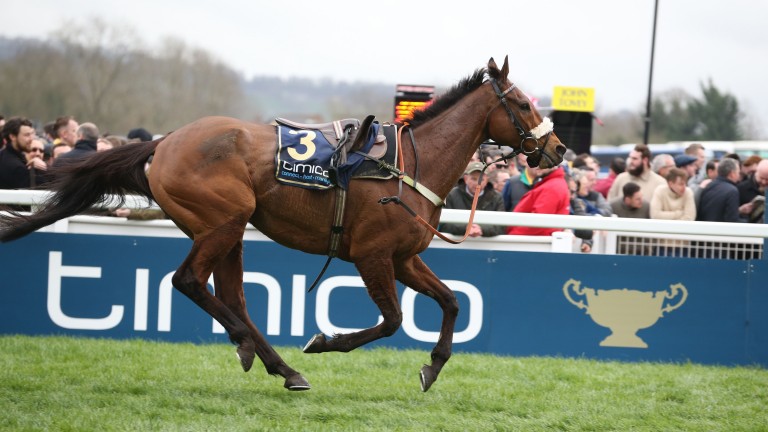 The third-last fence on Cheltenham's New course is set to be forever associated with Cue Card, but for all the wrong reasons, after the most popular horse in training once again crashed out of the Gold Cup at his birch-packed nemesis.

Twelve months ago there was agony for the star's connections and fans when he fell while still cruising and with a £1 million bonus in sight, causing jockey Paddy Brennan to subsequently admit: "I wanted to die."

At the very same fence, and in a miserably similar way, the 11-year-old fell once again, barely picking up and paying the price. This time, however, he was being pushed along having travelled with little fluency down the back straight.

To everyone's relief, Cue Card galloped away from the scene of the accident – and he is set to carry on galloping in races.

Owner Jean Bishop had suggested her veteran would be retired if victorious. Given the very different outcome, a trip to Aintree – where he was so imperious last year – could now beckon.

Asked if Cue Card would carry on racing, trainer Colin Tizzard said: "I should think so. Why ever not? There's not a scratch on him."

Tizzard's son Joe – Cue Card's rider for his two festival wins – added: "If he comes out of this okay we'll probably go to Aintree. There are certainly no plans to retire him.

"He fell too far out today to say he was beaten, but Paddy was niggling him and he definitely wasn't travelling as well as he had been last year. That's the way he races now."