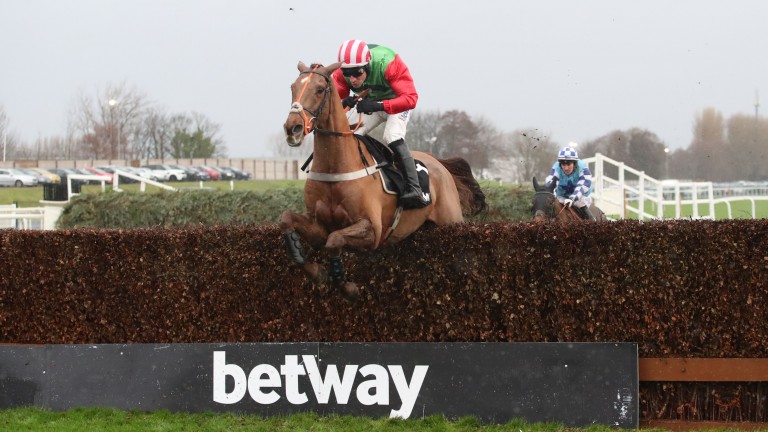 Next stop – the Magners Cheltenham Gold Cup. That was the ambitious plan for Definitly Red after the top staying chaser registered his second consecutive victory in the Grade 2 Many Clouds Chase at Aintree as the 1-2 favourite.

Not always given the credit he deserves, Definitly Red was in danger of being overshadowed again as One For Arthur returned to action for the first time since winning the 2017 Grand National.

The early exit of One For Arthur, who unseated Tom Scudamore at the third fence following a bad blunder, left all eyes on dual-purpose trainer Brian Ellison's stable star and he put in a typically resolute display under Danny Cook to gain his fifth Grade 2 victory.

"He's been a fantastic horse to train," said Ellison. "He finds a lot when you go for him and you always know there's plenty left in the tank."

Definitly Red, who is a best-priced 33-1 for the Gold Cup, finished sixth in the Cheltenham showpiece last season but Ellison is not put off by the prospect of having another go.

"The next step will probably be the Gold Cup," he said. "We'll go straight there fresh and I just hope we get better ground than last year.

"I know he wins on heavy but that was too heavy at Cheltenham. Looking further ahead, he'll have an entry in both the National and Bowl – I think the Bowl would be a safer option."

Back to the drawing board

One For Arthur was understandably fresh after 20 months off the track and trainer Lucinda Russell will have to go back to the drawing board to plot a path towards a return to the National in April.

"He seemed to be very fresh and over-enthusiastic and although he jumped the first two fences well, he stood off the next," she said.

"After that, we'll need to get him out again a bit sooner than we would've liked and we'll look at races at Wetherby and Haydock over Christmas."

FIRST PUBLISHED 4:54PM, DEC 8 2018
He finds a lot when you go for him and you always know there's plenty left in the tank