Defi in a different league as he seeks seventh success 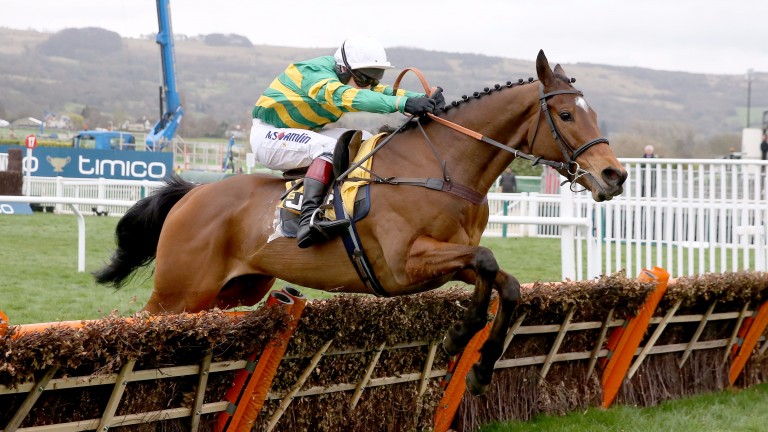 Before this year's Champion Hurdle hero is in action there is a chance to run the rule over many people's idea of next year's winner when the outstanding four-year-old Defi Du Seuil seeks his seventh win of the campaign.

He is already 8-1 second favourite behind Buveur D'Air in the betting for Cheltenham 2018 and appears to have a straightforward task of landing another Grade 1 prize as long as the effects of a long season have not taken their toll.

The race sets up a clash between the JCB Triumph Hurdle winner and the winner of the Fred Winter in Flying Tiger.

On ratings, Defi Du Seuil has a stone advantage and the chief opposition is expected to come from Divin Bere, who was a neck behind Flying Tiger when conceding 5lb.

Zarkandar, in 2011, was the last Triumph Hurdle winner to score but the two most recent winners to run here – Ivanovich Gorbatov and Countrywide Flame – were both beaten.

The Queen has a rare chance to secure a Grade 1 victory over jumps with Forth Bridge, who has earned his place after landing a Listed hurdle at Musselburgh.

Philip Hobbs, trainer of Defi Du Seuil
He's in very good form and we think he has a fantastic chance. I have seen no sign whatsoever that a busy season is catching up with him. He could well be an above-average Triumph Hurdle winner.

Nicky Henderson, trainer of Divin Bere
I haven't got any option but to take on Defi Du Seuil, who I've been very impressed with all the way through. He came out of the Fred Winter very honourably with top weight, and handicaps are no longer an option after a 4lb rise, but I can't say I'm expecting to beat Defi Du Seuil, who is going to be very hard to beat I'm sure.

Nick Williams, trainer of Flying Tiger
We have a lot to find with the first two favourites, but with a small field it was worth having a go. A stone is a lot to find on Defi Du Seuil, but we thought he had a sporting each-way chance.

Charlie Longsdon, trainer of Forth Bridge
He deserves to be in the race, although we don't deny the Hobbs horse [Defi Du Seuil] will be very hard to beat. He goes there fresh and well and will love the ground. I'm excited about running him.

Seamus Mullins, trainer of Landin
We aren't going to trouble Philip Hobbs's horse or Nicky Henderson's for that matter, but I would have thought the minor places are up for grabs. Easier ground would suit and they water well. They usually go a good gallop and he'll probably be doing his best work at the finish again.

FIRST PUBLISHED 6:00PM, APR 5 2017
I have seen no sign whatsoever that a busy season is catching up with him. He could well be an above-average Triumph Hurdle winner