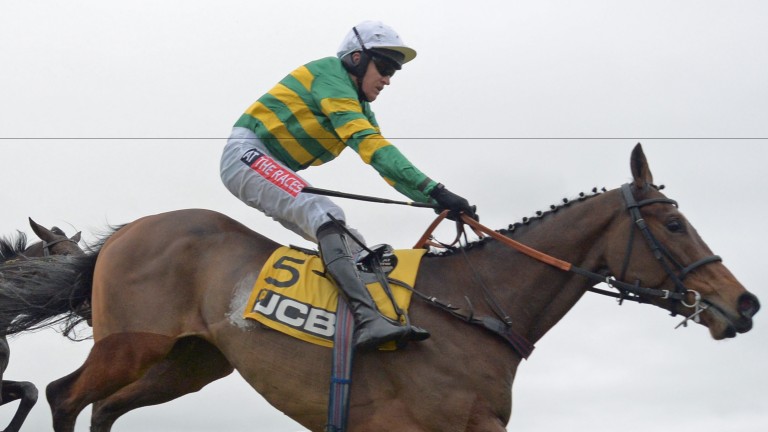 Defi Du Seuil: high-class recruit to hurdling is in action at Cheltenham on Saturday
1 of 1
By Richard Birch 2:02PM, DEC 10 2016

The JCB Triumph Trial Juvenile Hurdle often unearths a smart three-year-old, and there is every chance Defi Du Seuil, an impressive scorer at Cheltenham last month, fits that bill.

JP McManus's gelding barely came off the bridle to beat Diable De Sivola by a length and three-quarters that day, and his trainer Philip Hobbs said: "Defi Du Seuil came out of his last race very well indeed. He’s in good form, and must have a very good chance.”

Nicky Henderson, successful in the £20,000 contest two years ago with Hargam, relies on French recruit Domperignon Du Lys this time.

The son of Great Pretender ran out a commanding eight-length winner on his debut for the stable at Newcastle on Fighting Fifth Hurdle day recently, and Henderson said: "He will have learned a lot the other day, and I hope he's come on a fair bit for the run.

"We'll find out what he is here. It will be interesting."

The Alan King-trained Coeur De Lion was more workmanlike in getting home by a neck from Forth Bridge to land a Wetherby maiden hurdle last month.

King said: "Coeur De Lion was a progressive horse on the Flat, and stayed on well to win on his hurdling debut."

Henderson is two-handed in the Ryman Novices’ Chase, which was won by More Of That 12 months ago.

Henderson said: "Different Gravey was good at Ascot. He's got to build on that, but I don't see Cheltenham presenting any special problems."

Paul Nicholls and Sam Twiston-Davies team up with San Benedeto, who must concede weight to all five rivals after notching summer successes in low-key novice events at Sedgefield and Worcester.

"San Benedeto ran really well in a handicap at Newbury last time and is back in novice company. He's got a chance," Nicholls said.

The Colin Tizzard-trained Sizing Tennessee is an interesting contender after belying his odds of 33-1 to finish runner-up to Henderson's O O Seven at Cheltenham last month.

"He ran a cracking race last time out," Tizzard enthused. "Sizing Tennessee is a big, heavy horse, and I was a bit concerned going into that race that he wasn't ready.

"The horse has schooled well since, and is fit and hard now. There will be no excuses."

Gary Moore’s Baron Alco ran a decent race at Cheltenham on his penultimate start to finish a one and three-quarter-length third to Marracudja prior to justifying odds-on favouritism at Plumpton.

The Dan Skelton-trained Zarib, third at Towcester on his most recent start, completes the six-strong field.

FIRST PUBLISHED 6:00PM, DEC 9 2016
He came out of his last race very well indeed. He's in good form, and must have a very good chance