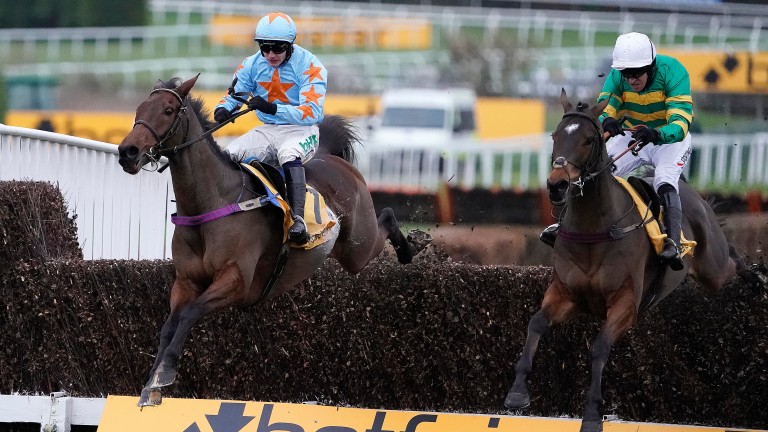 Ahead of the heavyweight clash in the Clarence House Chase at Ascot on Saturday, we asked racing professionals who they are siding with – the legendary 12-year-old Un De Sceaux or the up-and-coming Defi Du Seuil?

Tom Scudamore, jockey
I'd be with Defi Du Seuil and I'm expecting a repeat of the Tingle Creek result. I've got enormous respect for Un De Sceaux, who is one of my favourite horses and has a record that speaks for itself, but I don't see why he would reverse the form. Sandown and Ascot aren't too dissimilar and I'd expect the younger legs to have it again.

Ed Chamberlin, ITV racing presenter
I'm going to let my heart rule my head and go with Un De Sceaux, who I think sums up everything that is good about National Hunt racing. His longevity is incredible. He never seems to run a bad race and I think it's like a home fixture for him. Ascot on heavy ground is everything he could ask for and I think he's going to run another huge race. I'd love to see him win.

Noel Fehily, former jockey
There was nothing between them in the Tingle Creek. The ground and track suit both of them at Ascot so it's a difficult one, but Defi Du Seuil is the younger horse and he'll be hoping for a little bit more improvement. There won't be much between them and you'd love to see Un De Sceaux win it at the age of 12. He's been a fantastic horse, very consistent, and he runs his race every single time he turns up. However, the head would say Defi Du Seuil.

Richard Johnson, jockey
We're talking about two fantastic horses at opposite ends of the spectrum – an up-and-coming chaser versus one who has been there and done it all again and again. I'd sooner be with the younger and more progressive horse in these situations. Defi Du Seuil had the better of it at Sandown and I expect him to do so again, although there might not be much in it.

Charlie Deutsch, jockey
I've got nothing against Defi Du Seuil, but it would be great to see Un De Sceaux win the race for the fourth time. I love the way he races. He's a proper terrier, who enjoys a dogfight, and I think the ground is going to help him.

Wayne Hutchinson, former jockey
I'm a bit on the fence. I think it hinges on how soft the ground is at Ascot and if there is more improvement and match fitness on the back of Un De Sceaux's first run. Defi Du Seuil looked like he had a little more up his sleeve come the finish at Sandown so it might balance out, but for me it depends how bad the ground is. I'm going to stick with Defi Du Seuil, he's done nothing but improve and I think he's a worthy favourite.

Peter Scudamore, former eight-time champion jockey
I love Un De Sceaux, he's what National Hunt racing is all about, but I'm a big fan of Philip Hobbs and I think Defi Du Seuil is a wonderful horse. All roads should lead to a big clash with Altior at Cheltenham for him. It's going to be a very close run thing on that ground which should work in Un De Sceaux’s favour, but Defi Du Seuil is a magnificent horse.

Eddie Harty, trainer
Defi Du Seuil looks the up and coming force but the ground has gone in favour of Un De Sceaux, so I couldn't possibly call it. It will be a cracking race.

Expert analysis: why punters should pick a side in the hotly anticipated Clarence House Chase

Saturday Jury: Anthony Ennis and Jamie Snowden give their views on the weekend action

FIRST PUBLISHED 7:00AM, JAN 18 2020
I’m going to let my heart rule my head and go with Un De Sceaux, who I think sums up everything that is good about National Hunt racing