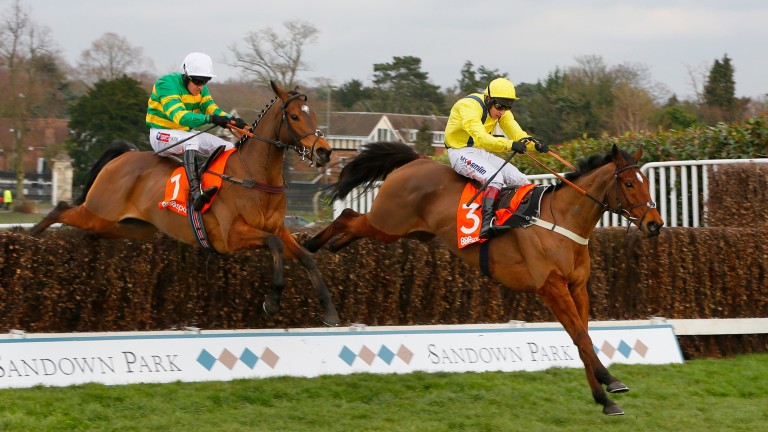 He ballooned most of the fences and finished last of five to Lalor at Cheltenham, leaving trainer Philip Hobbs to ponder whether he would ever get near the form of his juvenile season, when he won three Grade 1s.

Ten weeks on and the JP McManus-owned six-year-old sits top of the market for the JLT Novices’ Chase at the Cheltenham Festival and deservedly so after collaring Lostintranslation up the Sandown hill for a first Grade 1 win over fences.

Defi Du Seuil has looked better with each race since that opening chase defeat and in reversing Cheltenham’s New Year’s Day form with the runner-up halved in price for the JLT into a top-priced 6-1.

That Defi Du Seuil was sent off 7-2 third favourite for the 888Sport Scilly Isles Novices' Chase was evidence that he still had something to prove and also of the competitiveness of a contest that ended with favourite Vinndication relinquishing his unbeaten record.

“It’s great to get him back," said Johnson White, assistant trainer to Hobbs. "We knew he was a fantastic horse in his juvenile season. Last season was a write-off.

“We had done plenty of schooling at home with him before his chase debut and thought that was enough, but in hindsight perhaps it wasn’t. But he’s got better each time he’s gone to the races this season. He’s on an upward curve. A lot of juveniles don’t come back and regain their form, but he has.”

Defi Du Seuil handled the Railway fences well enough behind leader Lostintranslation before Barry Geraghty made his move between the final two fences, stealing into the lead after the last for a three-quarters-of-a-length success.

White said: “Barry was delighted with him, particularly with the way he jumped and coped with the ground. Where we go from here, a lot will depend on the ground, but he certainly saw the trip out well.”

Geraghty said: “It was a good, solid performance and I was very happy with him. It’s hard work on this ground and they’re only novices. Horses don’t get the same purchase off this sort of ground when they jump as they would on a sounder surface. He’s taken well to fences.”

Asked if he would prefer the Racing Post Arkle or the JLT, Geraghty said: “I don’t care so long as he wins!”

Colin Tizzard, trainer of Lostintranslation, said: “We were stalked all the way and got nabbed but it was a lovely run from our horse.

"There’s not much between the two of them at all. Richard [Johnson] thought he was probably lugging in a little bit left-handed, which is not going to hurt us at Cheltenham, and there’s no reason not to go for the JLT now.”

Trainer Kim Bailey said: “He found the ground too soft and struggled to jump out of it. I think he’s done remarkably well considering he hated every minute of it.”