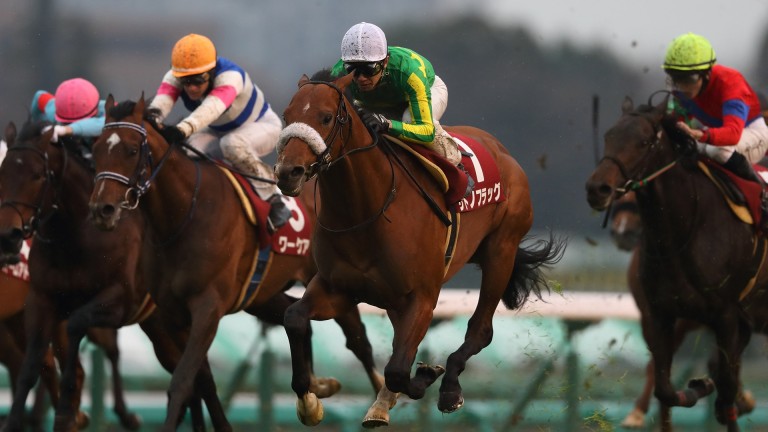 Satono Flag raced in midfield in the mile-and-a-quarter turf race before moving to the front four wide on the final turn, and going on to plunder what is a key stepping stone to the Japanese Classics.

Appropriately given the race title, Satono Flag is a son of the late great Deep Impact, out of Not For Sale's Argentina Group 1-winning daughter Balada Sale. This was his third win from the four starts and his first at stakes level.

It was also in keeping that Deep Impact's jockey Yutaka Take was in the saddle, the rider making it 34 consecutive years of stakes success since his debut in 1987.

Take said: "I rode him for the first time today, and he has the same character as his father. At the third corner, when Satono Flag went to the front by himself, it made me think of Deep Impact.

"The chance to challenge for this race on Deep Impact's son meant I wanted to win today. He will improve for this."

Trainer Kunieda added: "I thought his race positioning was perfect and then we saw his smooth turn of foot rounding the home turn. He will run better on fast turf.

"He has the triple attributes of mentality, physique and size. I will take him to the Satsuki Sho with confidence."

Wakea's rider Christophe Lemaire reflected: "There was no problem after the long rest and the yielding ground. He ran well and showed a good turn of foot but the winner was better on the day."

FIRST PUBLISHED 2:55PM, MAR 8 2020
I rode him for the first time today, and he has the same character as his father

Broad use of stallions strengthens Godolphin's hand in Europe and United States 'This is a dream' - Zurekin a gallant third for the Leech team in Prix la Barka 'I wish the Cox Plate was in two weeks' - Zaaki stars for rookie Brit trainer Fury, lawsuits but 'no flailing away': how US no-whip racing has been received Why Frankel investment has turned out to be some coup for Evergreen Stud Farm A first for Aidan O'Brien as St Mark's Basilica dominates French Derby