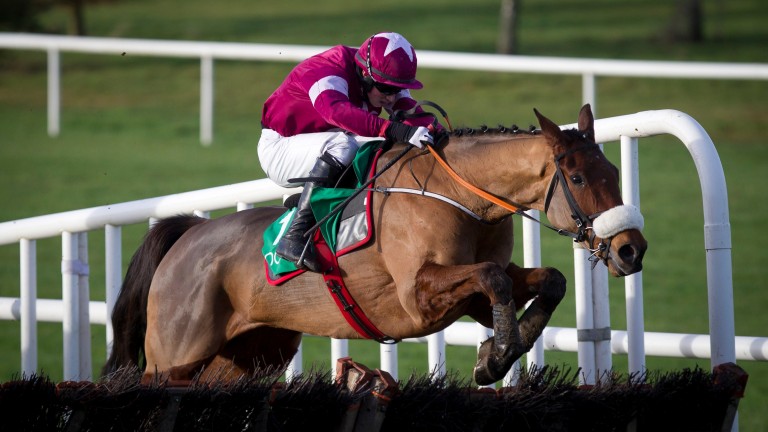 Death Duty clears the last on his way to an impressive victory
Patrick McCann
1 of 1
By David Jennings 7:58PM, DEC 18 2016

When asked where Death Duty ranks among Gigginstown's novice hurdlers, Michael O'Leary said: "I get nervous about ranking novices so I don't like to do a pecking order."

So let us do the pecking order for you, Michael. Death Duty is your number one and could well be your next Don Cossack judging by his decisive victory in this pre-Christmas treat that was a Grade 1 in everything but name.

Winning trainer Gordon Elliott suggested the Albert Bartlett Hurdle was very much in his mind so bookmakers reacted in the manner you would expect after such a stylish success. Betfair made him 11-4 favourite from 7-1 for the Cheltenham Festival race, while BoyleSports and Paddy Power went even shorter at 5-2.

Betfair halved his price for the Neptune as well, cutting him to 8-1.

"He's done it well and we like him a lot," said Elliott. "I thought he'd improved a bit from the last day and Bryan [Cooper] said he was on the bridle more today. He'll go now for the Grade 1 [Lawlors Hotel Novice Hurdle] at Naas on January 8. He looks an Albert Bartlett type."

Death Duty never looked in danger. The five-year-old got a lovely tow into the race from the front-running Monalee and, once Cooper pressed go shortly after the second-last, the race was over. The winning margin was officially three and three-quarter lengths but he was value for quite a bit more.

"I said coming here that a big bubble was going to be burst and thank God it wasn't ours," smiled Cooper. "His jumping kills other horses and he gets four lengths at a hurdle when another horse might get two.

"Shane McCann rides him in all his work and he told me this morning he has more gears than you think. He's not as slow as we think and he has plenty of options going forward. He was very good today."

Willie Mullins had farmed this race in recent years. Mikael D'Haguenet won it in 2008, while Boston Bob (2011), Pont Alexandre (2012), Briar Hill (2013) and Bellshill (2015) all did the business for the champion trainer. Only No More Heroes in 2014 was able to halt his dominance when seeing off Shaneshill.

Invitation Only was backed with confidence to enhance his trainer's recent record. Having been freely available at 5-2 during the week, he went off the even-money favourite but Ruby Walsh did not look happy leaving the back straight and the pair could not lay a glove on the winner.

Indeed, Invitation Only could not even get by Monalee, who held on for second by a length and a half. There was a further three and three-quarter lengths back to Moulin A Vent, who was let down by his jumping.