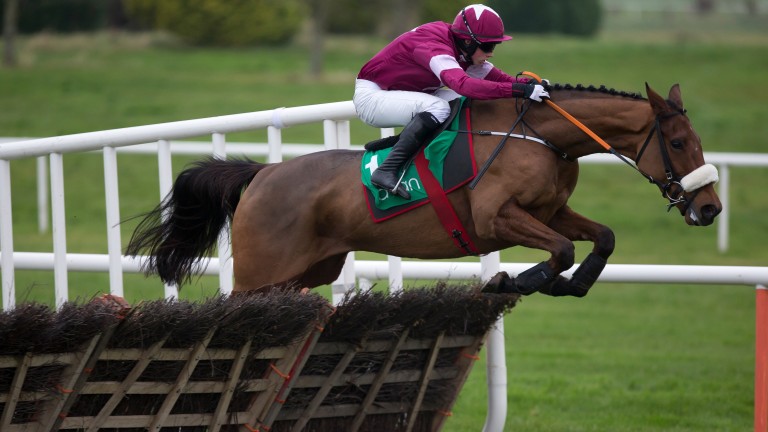 Death Duty: disposed of a strong field in the Monksfield Novice Hurdle
Patrick McCann
1 of 1
By Brian Sheerin 4:27PM, NOV 27 2016

Death Duty confirmed himself a top-notch staying prospect with an easy victory in the Monksfield Novice Hurdle at Navan.

He had got off the mark over hurdles in really good style at Roscommon last month, but this was an altogether different test of his mettle.

However, once he took command three hurdles from home, the outcome never looked in any doubt and he powered to the line seven and a half lengths clear of his closest rival She's A Star.

Paddy Power were most impressed with the performance and went 8-1 (from 12) for the Albert Bartlett. Sky Bet, Ladbrokes and Betway offered the biggest quote on Sunday night, going 12-1.

He deserves his place at the head of the betting, but we probably got only a glimpse of what he may one day achieve as he looks to be an out-and-out chaser.

Willie Mullins has farmed the 2m1f beginners’ chase on the same card in recent seasons and Min followed on from previous winners Ballycasey, Vautour and Douvan to provide the champion trainer with his fourth successive victory in the race.

It was interesting to hear what Patrick Mullins had to say before the race, as the champion amateur made reference to the fact that he is quite a tall and leggy individual who should improve for fences.

Min won in the manner expected of a Supreme Novices’ Hurdle runner-up. There were occasions where he showed inexperience and he should learn plenty for this chasing debut.

He is hugely exciting and could be on course for a mouth-watering re-match with Altior in the Racing Post Arkle, for which he was cut to a best-priced 5-1.

If Mullins' inkling is correct, and Min does improve over fences, he may be able to turn the tables on his Supreme Novices’ conqueror.

Empire Of Dirt earned quotes for the Randox Health Grand National and Timico Cheltenham Gold Cup following his smooth success in the Troytown.

Given how well he won the 2m5f Plate at Cheltenham last season, he would be of interest for the Ryanair Chase, for which he was quoted at 25-1 by bet365.

FIRST PUBLISHED 4:27PM, NOV 27 2016
He's hugely exciting and could be on course for a mouth-watering re-match with Altior in the Racing Post Arkle, for which he was cut to a best-priced 5-1