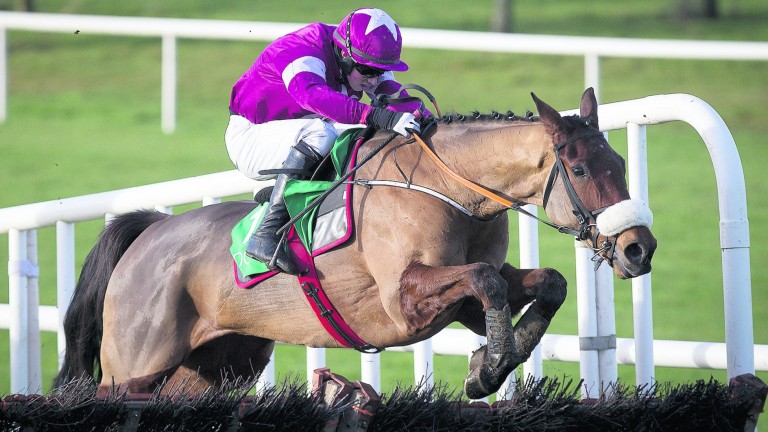 Death Duty will lead the way for Gordon Elliott at Cheltenham
Patrick McCann
1 of 1
By Brian Sheerin 12:36PM, JAN 8 2017

Death Duty has won stylishly in all three of his hurdle starts this term but Gordon Elliott’s exciting novice faces his sternest test as he bids to give the Willie Mullins-trained Augusta Kate 7lb and a beating in this.

Eddie O'Leary, racing manager for owners Gigginstown House Stud, is only too aware of Mullins' uncanny ability to come up trumps in this race and respects the threat that both Augusta Kate and stablemate Turcagua pose to their unbeaten novice hurdler.

O’Leary said: “Willie will be a tough nut to crack, no question. He has run some good horses in this race in the past and he even managed to win this with McKinley for us in 2015, so that tells you all you need to know.”

McKinley was certainly a surprise package, as he coasted by the better-fancied Gigginstown runner Tell Us More to strike at 33-1. O’Leary is hoping the race goes according to the script this afternoon.

“There’s no question Death Duty is our number one for this,” he said. “We know he stays well but he has shown enough pace over his hurdles to suggest he could be a Neptune horse and we have the option of the Albert Bartlett as well at Cheltenham.

“We think he is one of our best novice hurdlers and, with any luck, he should run very well.”

There may not be a surprise as big as McKinley lurking among the maroon and white triumvirate, but Blood Crazed Tiger, a stablemate of Death Duty, arrives here on the back of four wins including a Listed success at Cork last time, while the Noel Meade-trained Bel Ami De Sivola has won his last three starts.

O’Leary added: “Blood Crazed Tiger is overlooked in the market, I can tell you that. I had a look at the tissue prices when the declarations were made and there is no way he should be a double-figure price. Bel Ami De Sivola is still quite raw and weak, but he is a nice prospect as well.”

Having landed six of the last 11 runnings of this, including the last three, Mullins has high hopes of continuing his fine record with either Augusta Kate – owned by the Masters Syndicate, which includes Lee Westwood, Alan Shearer and Ant and Dec – or Turcagua.

He said: “Ruby [Walsh] has opted to ride Augusta Kate, who won comfortably over two miles and seven furlongs on her hurdling debut at Thurles in November.

“Her method of jumping was excellent and we think she's open to a lot of improvement. It will be a big step up for her, going from a mares' maiden to a Grade 1, but she was a very good bumper performer and the 7lb mares' allowance will help.

“Turcagua is also improving and he put up a smart display last time. He deserves a shot at this distance.”

The field is completed by the Enda Bolger-trained Stand Up And Fight.

Bolger said: “This is one of the best novice hurdles to be run this season. We think a lot of our fellow but he’s probably more of a chaser for the future.”

FIRST PUBLISHED 6:00PM, JAN 7 2017
Willie will be a tough nut to crack, no question. He has run some good horses in this race in the past and he even managed to win this with McKinley for us in 2015, so that tells you all you need to know