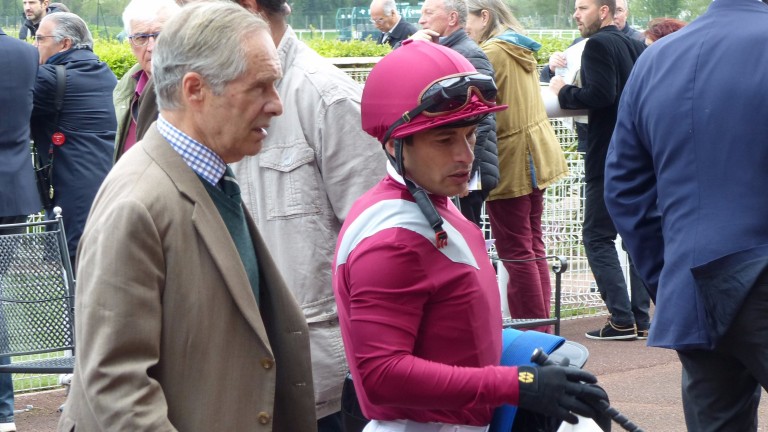 Silvestre de Sousa with Andre Fabre after the victory of Last Kingdom at Maisons-Laffitte in April
Racing Post / Scott Burton
1 of 1
By Scott Burton 7:17PM, JUN 28 2017

Silvestre de Sousa continues to profit from his trips to France as first jockey to Prince Faisal and he landed a first Group race for his boss when guiding Last Kingdom to a neck success over Spotify.

The son of Frankel made it three from three for the season – all at Maisons-Laffitte and all under De Sousa – and was recording his first win at further than a mile.

Ted Voute, representing Prince Faisal, said: "We've taken little steps so far and I think it might be more of the same and we are hoping he might stay a mile and a quarter.

"It's nice for Frankel and he is the most expensive yearling [$500,000 at Keeneleand] the prince has bought in a long while so we were hopeful. He has grown up physically and mentally each time and Andre [Fabre] hasn't rushed him, which seems to be suiting him."

Two lengths further away in third was Neguev, who was forced to make the running on his first start since being sidelined by a virus at Jean-Claude Rouget's yard in Pau.

Neguev finished in front of Al Wukair when the pair made their debuts at Deauville last summer but was disaqualified for interference.

"I am very happy with him as he ran straight and was generally a lot better than previously," said Rouget.

"He is an interesting project and will go to Deauville, although I don't know which race, since you tell me where I can find a Listed race over 2,000 metres [a mile and a quarter] under the new programme."

Fabre was completing a Group race double after Rosa Imperial (Mickael Barzalona) pulled a length clear of the experienced Son Cesio to make it three wins from as many starts.

Godolphin's four-year-old daughter of Pivotal did not make her debut until May this season but has shown the talent which clearly persuaded Fabre to persist with her.

Godolphin's Lisa-Jane Graffard said: "Last summer she was working well but then had a slight problem. Her trainer told us it would be worth the wait. She might still be a bit inexperienced for Group 1 company but she is certainly up to Group 2 level."

FIRST PUBLISHED 7:07PM, JUN 28 2017
He has grown up physically and mentally each time and Andre hasn't rushed him, which seems to be suiting him