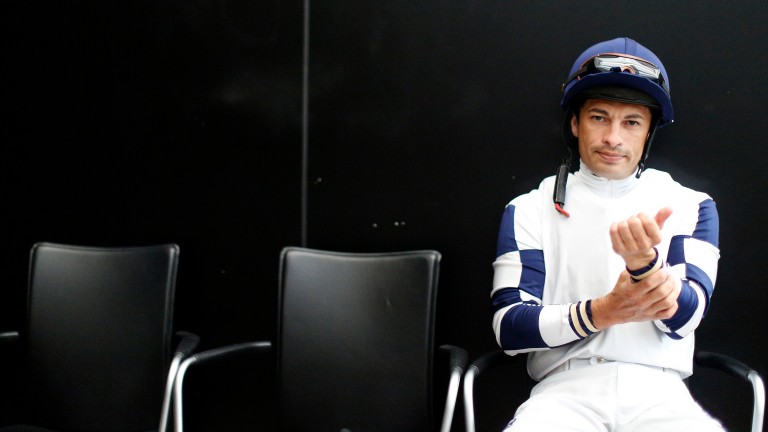 Silvestre De Sousa believes he should not be among the first five in the betting to be champion
Alan Crowhurst
1 of 1
By Scott Burton 10:33AM, FEB 28 2017

Despite the twin boost of a new retainer with Prince Faisal and the promise of increased collaboration with Mick Appleby, Silvestre De Sousa believes he is a longshot to regain the Stobart Flat Jockeys' title he won in 2015.

De Sousa kicks off his year in Britain with rides aboard Annie Salts (2.00) and Dutch Uncle (3.00) at Lingfield on Tuesday, buoyed by a successful stint in Hong Kong over the winter.

The 36-year-old is a best priced 7-4 favourite with Paddy Power to succeed Jim Crowley, who overhauled him during a see-saw climax to the 2016 campaign.

Crowley has since succeeded Paul Hanagan as first jockey to Hamdan Al Maktoum, but De Sousa does not see that as increasing his chances of wrestling back the title.

"I've been there and know how hard it is to get there - and it’s even harder to stay there," said De Sousa on Monday.

"We'll see how the year goes but my main target is just to ride winners and avoid getting injured. I think Paul Hanagan has a good chance, as well as Andrea Atzeni, William Buick, Jim Crowley again. They have big stables supporting them and I think the title will be between them.

"I'll be an outsider chasing the dream. I wouldn’t say I'm favourite - the bookmakers have it wrong."

De Sousa admitted he was excited about the link up with Prince Faisal, whose string of 12 is spread between Andre Fabre, Roger Varian and Hugo Palmer.

He said: "I'll be very focused on my job with Prince Faisal and hope to ride him a big winner. I'm looking forward to it and it will be nice to get over to France and work with Mr Fabre; that will be a good experience.

"That’s what you're always looking for - a nice horse to take you along to the Classics and to be competitive."

Two of De Sousa's staunchest supporters, Chris Dwyer and Ed Dunlop, provide his mounts at Lingfield, and he expects those two, as well as Mick Channon, to again be among his mainstays in 2017.

And the news that Appleby will also be supplying ammunition for De Sousa - who has bagged five winners in 22 rides for the trainer over the last five seasons - can only be a help in his quest for winners.

Appleby revealed: "Silvestre will be riding for us when available. He will come in and ride out once a week. He's one of the best jockeys about and it will be good to have him on board.

De Sousa enjoyed a fine spell in Hong Kong - a notoriously hard place for a visiting jockey to crack - riding 16 winners and having another 48 placed for an eye-watering HK$26.8 million (£2.77m/€3.26m).

De Sousa said: "It’s not an easy place to ride winners, believe me, but I had a fantastic time and it was nice to have big owners and trainers behind me, which is very important over there."

De Sousa will dash back to Hong Kong to partner Pakistan Star - whose exaggerated waiting tactics have made him a darling of the internet - in the BMW Hong Kong Derby on March 19.

Hanagan, who has returned to freelancing, won the jockeys' title in 2010 and 2011, and is second favourite at a best-priced 11-4 with William Hill. This time last year De Sousa was vying with Ryan Moore at the head of the market, with Crowley a 50-1 outsider.

FIRST PUBLISHED 7:00AM, FEB 28 2017
I'll be an outsider chasing the dream. I wouldn’t say I'm favourite; the bookmakers have it wrong

'A model of consistency' - Linda Perratt praises winner as solid form continues 'Jim can keep things simple and I expect Baaeed to be even better at this trip' 'I'll be disappointed if he doesn't win' - which trainer is ultra-confident? Finest Sound set for Ebor meeting after 'confidence booster' feature win 'You need a stable and I don't have one' - De Sousa leaving for Hong Kong