'Brilliant' Blackmore and De Bromhead on top once again with Telmesomethinggirl 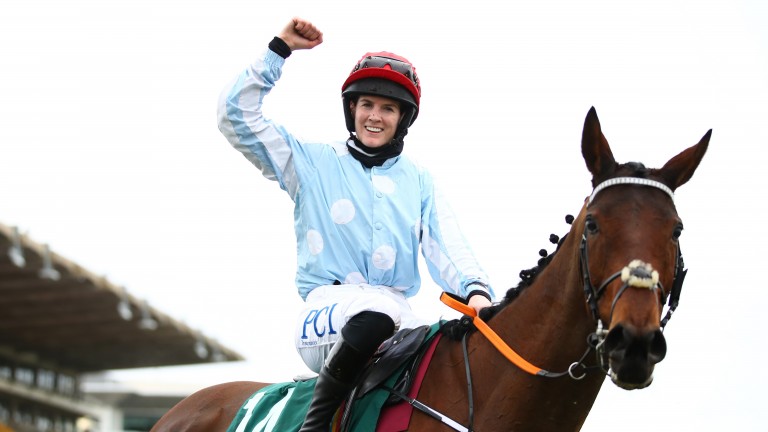 On top of the world: Rachael Blackmore registers her fifth festival success of the meeting aboard Telmesomethinggirl
Michael Steele
1 of 1
By Brian Sheerin UPDATED 7:44PM, MAR 18 2021

There seems to be no greater unstoppable force than a jockey on form, and Rachael Blackmore has certainly been that at Cheltenham throughout the week.

Victory aboard Telmesomethinggirl in the Mares’ Novices' Hurdle on Thursday brought Blackmore’s tally of winners to five and inched her ever closer to a historic maiden top riders’ title at the festival.

To think it was just four seasons ago when it seemed Blackmore had missed out on her big break, as she was denied the chance to shine in the Martin Pipe Handicap Hurdle due to the age cap on the conditional riders in the race.

They say good things come to those who wait, and Blackmore had to be more than patient aboard the six-year-old, fighting every sinew to take up the running on the strong traveller before finally hitting the front approaching the last.

When she got there, Telmesomethinggirl extended up the hill like a dog who had just been freed from its leash and left stablemate Magic Daze in her wake, with De Bromhead recording a one-two to end Willie Mullins' domination in the Grade 2.

Blackmore’s tally of five winners is one more than the home team have managed to cobble together at the festival this far, which tells you exactly which nation and supremely-talented jockey have been in charge.

The win also cemented De Bromhead’s prowess with fillies and mares. Not only did he bag Tuesday’s Champion Hurdle with Honeysuckle who, like Telmesomethinggirl, carried Kenny Alexander’s pale blue silks to victory, but he also became the first trainer to send out a mare to win the Champion Chase on Wednesday with Put The Kettle On.

Once again, he revelled in yet more mares' success with his trusted stable jockey at this year's festival.

De Bromhead said: “I’m delighted for Rachael. She is such a good rider and an ultimate professional and she is brilliant to work with. She earns everything she gets.

“We are very lucky to have good mares like them and getting tremendous support from our owners. I thought she had a chance but on ratings I thought she might struggle a bit with some of the other ones but I hoped she would have a squeak.

“It was two miles two last time and the one concern today might have been the trip and that might have been a bit sharp for her around here, but she's is pretty versatile.”

Blackmore, who was also successful in the day’s Ryanair Chase aboard the Willie Mullins-trained Allaho, struggled to put into words exactly what the whirlwind week meant to her.

She said: “I am genuinely just so overwhelmed by these past few days and it’s all about the horses you’re getting on. I’m just so lucky to be riding for the people I am riding for.”

FIRST PUBLISHED 4:31PM, MAR 18 2021
I am genuinely just so overwhelmed by these past few days and it’s all about the horses you’re getting on. I’m just so lucky

De Bromhead doomed to come up short on last year - but are things that bad? 'The atmosphere is great - it feels like more and more people are going racing' 'I'm surprised there isn't a queue' - Gold Cup sponsorship hunt goes to the wire Honeysuckle 'heavier and stronger' in bid to create history in Champion Hurdle