De Boinville back riding out but no return date set 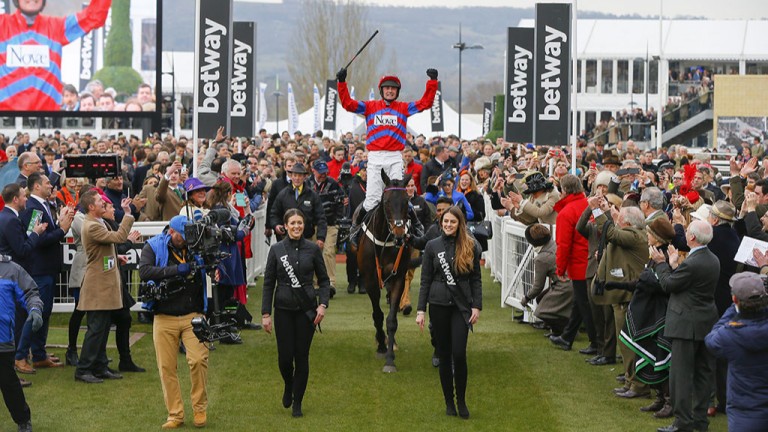 Nico de Boinville: has enjoyed some superb days in the saddle
Edward Whitaker (racingpost.com/photos)
1 of 1
By Stuart Riley 4:38PM, JAN 15 2017

Nico de Boinville has been riding out and schooling as he continues his recovery from injury and although no date has been confirmed for his comeback, he expects to return before Cheltenham.

The Champion Chase and Gold Cup-winning jockey will know more about his likely return date after meeting the surgeon who pieced his broken arm back together after he unseated from Le Reve at Cheltenham in November.

"I rode out for the first time this week and did a bit of schooling, but I don't know when I'll be able to return until after I have met with my doctor - which will hopefully be soon," said De Boinville on Sunday.

"I'm not in a rush and I don't want to put a time frame on it until I know more accurately. I'll be back when I'm ready."

Asked if his participation at the Cheltenham Festival was in doubt, he added: "From what the surgeon first told me we are slightly ahead of schedule for my return and the festival is well within reach."

De Boinville has been out for over two months and revealed he was finding his enforced lay-off more difficult mentally than physically.

"Oaksey House has been brilliant as always when it has come to getting me back on my feet and feeling good again," he said.

"It's been difficult because I'm effectively unemployed, which is not good. I'm just working hard to try and get my job back and earn a living again.

"I'm lucky to be surrounded by great people and the IJF have been brilliant in supporting me and helping me both mentally and physically to get back to work but an injury like this does make you realise every day you get to go racing is a good day."

De Boinville has already had some incredible days on a racecourse, partnering Altior and Sprinter Sacre to glory at last year's festival and winning the 2015 Gold Cup aboard Coneygree.

Unlike De Boinville Coneygree will not recover from his own set-back in time to make the festival and his regular partner added: "The Bradstocks have done wonders with him and I'm sure they'll get him back as soon as possible  -but no sooner - he's a bit like me in that regard, he'll just take some time."

Noel Fehily, who has been riding Altior in De Boinville's absence, took a crashing fall at Warwick on Saturday but after x-rays revealed he had not broken anything he said he expects to be back midweek.

"I'm a bit battered and bruised but nothing's broken," Fehily said. "I'm not riding today or tomorrow and then we'll see how things are. I'll definitely be back by the weekend, I expect it'll be Tuesday or Wednesday."

FIRST PUBLISHED 4:38PM, JAN 15 2017
It's been difficult because I'm effectively unemployed, which is not good. I'm just working hard to try and get my job back and earn a living again