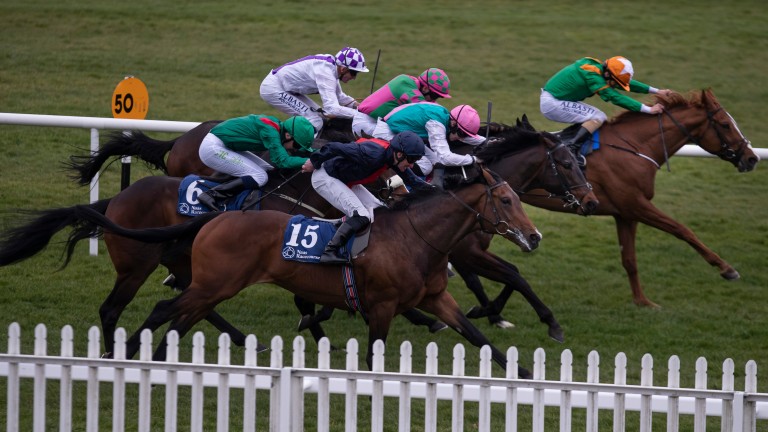 Russian Emperor (15) storms home down the outside under Seamie Heffernan to win his maiden at Naas in March before the lockdown began
Patrick McCann
1 of 1
By David Jennings UPDATED 6:08PM, JUN 8 2020

Once upon a time the Derrinstown was the ultimate Derby trial. Sinndar (2000), Galileo (2001) and High Chaparral (2002) all won at Leopardstown on their way to Epsom glory but it is 18 years since the double was done.

High Chaparral was the last to achieve the feat under Seamie Heffernan and the longest-serving player on the Ballydoyle team is seeking his fifth win in the race on Russian Emperor, the likely favourite who stormed home to snatch a Naas maiden on the first day of the Flat turf season at Naas.

Russian Emperor was actually two lengths behind Iberia when the pair met in a 7f maiden at the Curragh last July, but the Galileo colt looked a much-improved performer on his return at Naas in March.

On that occasion, he touched the maximum price of 999-1 in running on Betfair, but somehow managed to snatch victory from the jaws of defeat. It was only inside the final half-furlong that he started to learn his craft properly.

There must be more to come and Aidan O'Brien thinks so too. Indeed, you would find many worse 40-1 shots than Russian Emperor for the Derby. Victory here and those odds will halve at the very least.

O'Brien said: "He won first time out this season at Naas and we think a mile and a quarter will suit him really well. He was still a bit green at Naas and he is learning all the time. The extra distance will help him and we think he's a nice horse."

O'Brien has opted to put blinkers on his two other contenders.

Iberia is the most experienced of the Ballydoyle challenge. He was a rare winner for the stable on his debut and had five runs at two.

Perhaps his best display of all came in the Royal Lodge at Newmarket where he was just a length and a half behind the 2,000 Guineas winner, Kameko. Given the way he kept going over a mile there, this 1m2f trip could be the making of him.

"Iberia is just a bit lazy so we're putting blinkers on him to try and waken him up a bit. He's in good form and ready to start back. It is the same story with Cormorant, who is lazy too and we thought blinkers might help him," the champion trainer added. 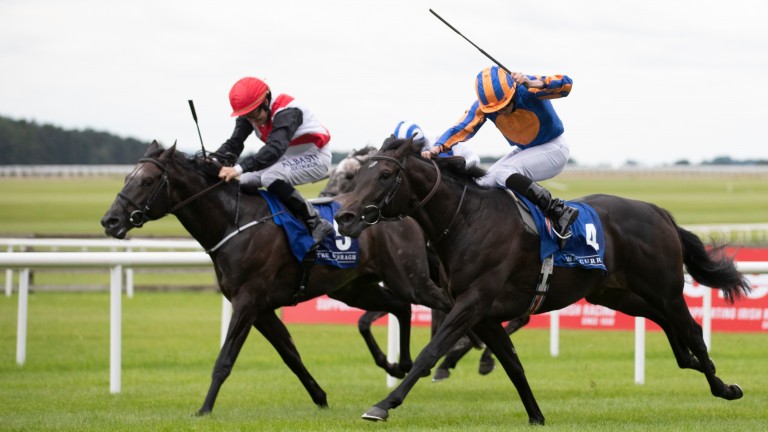 Iberia: winning his maiden at the Curragh
Patrick McCann (racingpost.com/photos)

Andy Slattery, the trainer with whom Faugheen began his career, has the Irish Derby on his mind for Sunchart but fears the quicker ground for his Tipperary maiden winner.

Slattery said: "The Derrinstown was always the plan, no matter when it was. He's a very nice horse, he's working well and we're looking forward to finding out where we stand with him.

"The ground is the worry, though. He's never ran on anything like that ground. They tell me Teofilos want good ground so hopefully he will handle it. If everything went well here, we might have a go at the Irish Derby but that will be up to the owner."

Sunchart is smart, and his Tipperary maiden win looks solid form, but that was on ground officially described as soft to heavy so switching to good to firm ground might be a shock to the system.

Agitare is a maiden. That sentence does not do him justice, however. He has been placed in four high-quality maidens and was a close-up third to Mogul in a Group 2 over a mile here at Leopardstown last September. He may have to settle for more place money here.

Ger Lyons has never won the Derrinstown but the form of Baby Zeus's maiden win at Killarney on his debut, where he beat the 107-rated Arthur's Kingdom, does not look too shabby now.

That said, he was beaten by Raven's Cry next time back at that venue and an official mark of 90 would suggest he has something to find.

It looks like lucky number 13 in the Derrinstown for O'Brien and Russian Emperor makes the most compelling case. That 40-1 with William Hill for the Derby could look very big indeed come five past two on Tuesday.

FIRST PUBLISHED 6:00PM, JUN 8 2020
The extra distance will help him and we think he's a nice horse

Can Aidan O'Brien land his eighth Tyros Stakes in a row with Point Lonsdale? Japan just does enough to bag the Meld Stakes at Leopardstown High-class Japan drops to shortest distance since juvenile season in Meld Stakes