Spring Carnival WHAT WE CAN LEARN 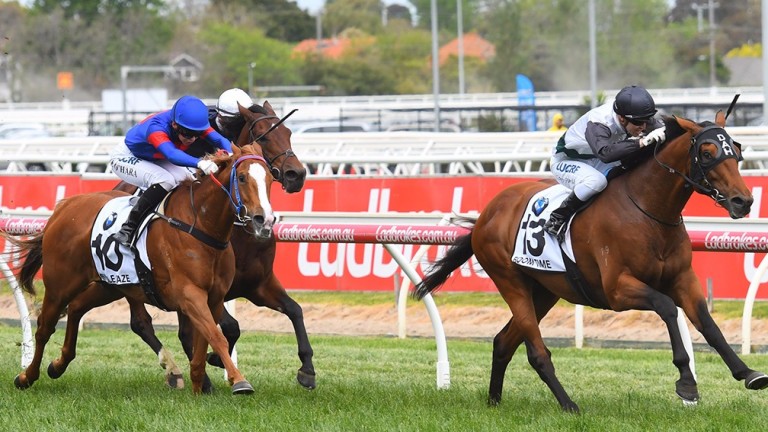 Boom Time wins the Caulfield Cup: after the race all jockeys were asked for their thoughts on it by racing.com
Vince Caligiuri
1 of 1
By David Jennings UPDATED 12:53PM, OCT 26 2017

Were you one of those who contributed to the £43,000 which was lumped on Seyaady after the 5f novice stakes at Carlisle on May 22 had finished? If you were, look away now. You would not have had the chance to lose that dosh in Australia.

We spend seconds, often minutes, tilting our heads trying to figure out a tight finish in Britain and Ireland. You can often bet on the outcome after the race, and many do. In Australia the puzzle is solved so much quicker.

I was at Geelong on Wednesday and the finish to the eighth race was so close that the course commentator dared not call it. At first glance it looked as though Ghisoni had got up. We found out within 20 seconds he hadn't. Deja Blue had held on by a short head. That was not because the result was called, it was because we could see it with our own eyes. The evidence was there for all to see.

The photo-finish print was shown on screens all around the track within seconds of the horses passing the line. Surely in this day and age similar technology could be used in Britain and Ireland to speed up the photo-finish process?

Ten-race cards are quite common in Australia and, even more common, is the tenth race going off on time. Would that happen back home?

The Balmoral Handicap, the last of six races on Champions Day at Ascot, was due off at 4.30. The stalls opened at 4.39.

When asked about their impressive punctuality, the Aussie authorities replied: "They have to run on time. We're running to a strict schedule with different meetings which are televised all over Australia. If one race runs late that has a knock-on effect somewhere else. It's very important that everything goes off on time."

Isn't that the same scenario back home? At The Races and Racing UK could be showing multiple meetings so races going off on their schedule start times should be paramount. Yet it doesn't seem that way. Perhaps it is time to start taking time more seriously.

Looking out for owners

Owners are treated like film stars in Australia; you would think they all had parts in Home And Away. They're made a fuss of. They're made to feel special. Their raceday experience is different to the rest.

At Caulfield last Saturday I was kindly brought to the winners' lounge by Warren Moore after Cliff's Edge had won the Group 3 Ladbrokes Classic. It was a learning curve for me.

There was champagne flowing, beers on ice, fancy sandwiches, mini desserts. There was enough food and drink to feed an army, which was lucky as there was an army of owners attached to Cliff's Edge. They made a right racket when the replay of the race was shown. The atmosphere was electric.

The winning owners were then told that they could sign up for free membership to Caulfield for the next year. Talk about getting the double up!

There are special areas for all owners at racecourses in Melbourne with bars and buffets. If you own a hoof of a horse you get to enjoy that special treatment.

There could be up to 12 names of owners next to a horse on a racecard over here. Among those names could be families and syndicates. When Urban Ruler won at Geelong on Wednesday there were so many in the winning picture that the entire parade ring was almost full. The scenes were comical.

There is surely something to be learned from the way the Australian authorities treat their owners.

My esteemed colleague Lee Mottershead mentioned the practice in a recent column and what he wrote made perfect sense.

As each jockey made their way back to the weighing room after the Caulfield Cup on Saturday, there was a member of the racing.com team to ask each one for their thoughts on the race.

Some gave superb analysis, particularly Ben Melham, who rode Johannes Vermeer. Others said what needed to be said, like Hugh Bowman, who quickly explained that Marmelo ran a perfect trial for the Melbourne Cup. The main thing was that the questions were asked and jockeys accepted the fact they needed to answer.

Imagine something similar after each race at the Cheltenham Festival? Knowing within minutes that the horse you backed in the Supreme left his hind legs in the second-last or was further back than he was supposed to be.

I don't think Mottershead or I are on our own here. This is something that we should start for the big days. Sorry, Ryan.

Let the public meet our stars

My date with Winx at 6am on Tuesday at Moonee Valley was probably the best first date I've ever had. Sorry, Aoife.

To be able to get up close and personal with such a legend was almost surreal. I had a media badge, but Pat the plumber from down the road could have got just as close to her.

Seeing her relax in her stable, watching her being tacked up, walking elegantly around the parade ring, gliding down to the start and then watching her work was a sight to behold. 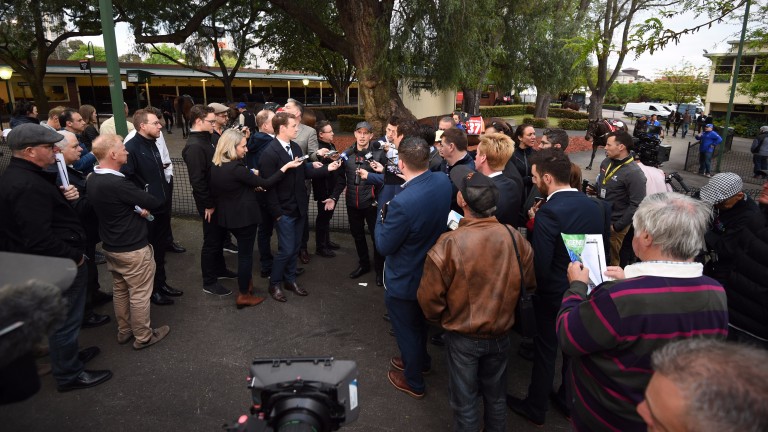 There was free entry, free coffee and free egg and bacon rolls for everyone. Australia have a superstar and they want the public to become her best friend. We don't do that.

If another Frankel comes along we need to bring the public on the journey and make them feel a part of the story.

There are no tickets left for Moonee Valley on Saturday to see Winx. A crowd of 30,000-plus will be there. It is because of mornings like Tuesday that sell-out crowds happen.