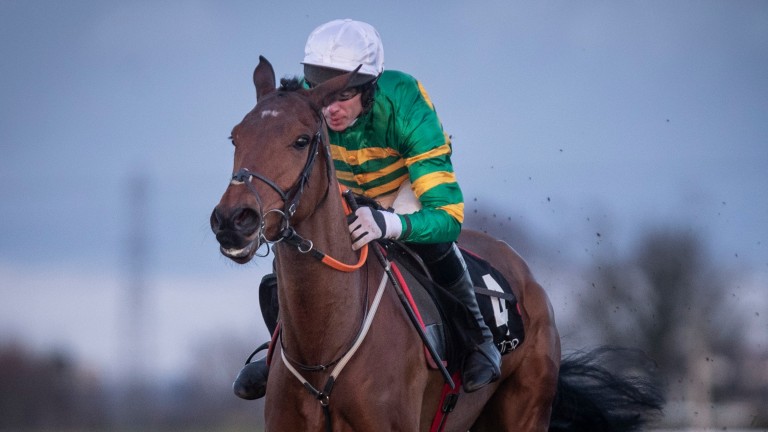 It’s only fair to warn you that my ten selections, like rather a lot of my selections, may prove a disappointment. Although I watch a lot of races and form a lot of opinions, it is possible that someone else’s opinions, perhaps your own, will prove to be better.

On the other hand, I did back Ben Nevis at 40-1 for the 1980 Grand National. I bet you didn’t, possibly because you hadn’t been born. So, say not the struggle naught availeth, even though it probably will.

A sound strategy is essential, taking careful account of the scoring system, with its bonuses for the winners of the jewels of the jump racing season.

A sound strategy is essential but I’ve a horrible feeling I haven’t got one, although if some of the horses on my list do win at the Cheltenham Festival, £1 win and place on the Tote may pay handsomely. Here goes.

Fakir D’Oudairies is presumably named after someone who has taken a vow of poverty – a punter, I expect. Having trained the winner of the Melbourne Cup, Joseph O’Brien will now train the winner of the Arkle Chase, showing that father Aidan still has a lot to learn.

After arriving from France, Fakir D’Oudairies developed into a top juvenile hurdler, fourth against older horses in the Supreme Novices’ Hurdle before finishing runner-up in Grade 1 juvenile hurdles at Aintree and Punchestown.

At Navan this month he won a beginners chase impressively. His jumping was excellent, neat and clever when necessary, bold on occasions, with Melon chasing vainly. Yes, he’s going to win the Arkle.

Abacadabras cost only €14,000 as a three-year-old, so it can be done. Fourth in Cheltenham’s Champion Bumper last season then runner-up in the Punchestown version, his classy display when winning a Grade 3 novice hurdle at Navan this month gives him a great chance of winning the Grade 1 Royal Bond Hurdle at Fairyhouse on December 1. Then, hopefully, onwards and upwards. He may or may not need soft ground.

I’ve picked Riders Onthe Storm firstly because it gives an excuse to hear the Doors’ classic again (see Youtube). Secondly, trainer Nigel Twiston-Davies is very jolly, especially after a winner. Thirdly, no sooner had Riders Onthestorm joined Twiston-Davies from Ireland than he won a valuable handicap at Aintree in the manner of a horse with potential to do better, which he’ll need to as the handicapper has put him up 10lb to 150.

I’m not sure what else Riders Onthe Storm is going to win but probably one of those 2m 4f chases at Cheltenham or Aintree or Punchestown or Worcester.

Lostintranslation is a very enjoyable film that became a high-class hurdler and now a higher-class chaser. When Lostintranslation won a four-runner chase at Carlisle on his seasonal reappearance he arrived as an established star novice chaser. He looked physically impressive and jumped brilliantly.

It’s a thrill watching a horse jump that well so, whether or not he wins the Cheltenham Gold Cup, there’ll be some wonderful leaps along the way.

There needs to be a mare or two in the list and The Glancing Queen, a top-class former bumper performer, has the honour.

According to Alan King, “she’s very, very good” but won’t be ready to run until Christmas or later. That’s all right, I don’t mind waiting. It’s important to have someone else to blame, so if The Glancing Queen has a disappointing season it’s not my fault.

He may or may not improve past Saldier, his conqueror at Punchestown recently. Critics could contend it’s a mistake to include both but they won’t be saying that if the pair dead-heat in the Champion Hurdle, or various other Grade 1 Hurdles.

It’s worth noting Saldier’s success in last season’s Four-Year-Old Champion Hurdle at Punchestown and recent stylish Grade 1 success at the same track. Probably best on soft ground. I think that covers everything.

Lake View Lad (if you’re watching, he’s the grey one) is the star of Nick Alexander’s stable and is a solid performer. He followed up victories in last season’s Listed Rehearsal Chase and Grade 3 Rowland Meyrick Chase with third place, off 155, in the Grade 3 Ultima Handicap Chase at the Cheltenham Festival.

Pretty much all Lake View Lad’s form is on soft or heavy ground, so rain is important. I don’t know what the weather forecast is but I’m hoping Lake View Lad will win something big.

I wonder if Camilla Sharples would like to marry me? It’s just that she seems to have bought Andy Dufresne for next to nothing and sold him for £330,000 last year. So far he’s earned JP McManus £12,737, but the way he won a maiden hurdle at Navan this month suggests that bigger prizes lie ahead. I hope so, or both JP and I will have made a mistake.

The second female representative is Verdana Blue. Connections will be hoping the ground isn’t soft on Champion Hurdle day, as it was last season. A month later, on faster ground, Verdana Blue romped away with the Scottish Champion Hurdle. Earlier, she had won the Christmas Hurdle at Kempton, which is likely to be her initial target again.