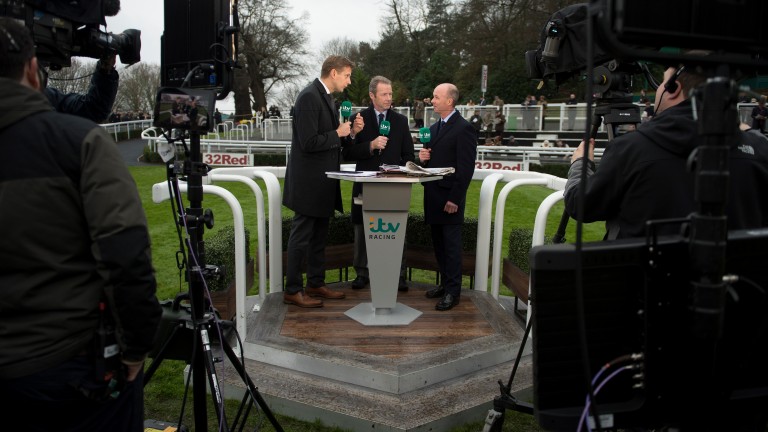 The ITV presentation team of Ed Chamberlin, Mick Fitzgerald and Luke Harvey on duty at Sandown
Edward Whitaker
1 of 1
By Jon Lees 9:05AM, JAN 12 2017

Channel 4's coverage of darts last Saturday drew a bigger audience than that which watched racing on ITV4 last weekend.

Viewers of the BDO World Darts Championship, scheduled in the afternoon slot which had been occupied on the network by horseracing for 32 years, averaged 516,000, a 4.8 per cent audience share.

That exceeded the numbers who watched Tolworth Hurdle day at Sandown shown by racing's new terrestrial partner. Viewers peaked at 419,000 and averaged 325,000 for the debut screening on ITV4.

But the darts, for which Channel 4 has signed a two-year deal after the sport was dropped by the BBC after 38 years, attracted an audience smaller than that which watched Channel 4 Racing for the corresponding weekend last year when the programme drew an average audience of 556,000, a 4.8 per cent share.

The new era of ITV Racing launched on January 1 on the main channel, drawing a peak audience of 831,000 and an average of 676,000 to beat the audience achieved by predecessor Channel 4 in the previous two years.

ITV hopes to draw a bigger audience to racing by committing to showcasing the major racedays on the main channel but nearly all the Saturday action will be screened on ITV4 until the Cheltenham Festival in March. Racing coverage on March 3 will be shown on ITV3.

FIRST PUBLISHED 8:35AM, JAN 12 2017
The darts attracted an audience smaller than that which watched Channel 4 Racing for the corresponding weekend last year