Dante and Derby runners face off once again for royal title 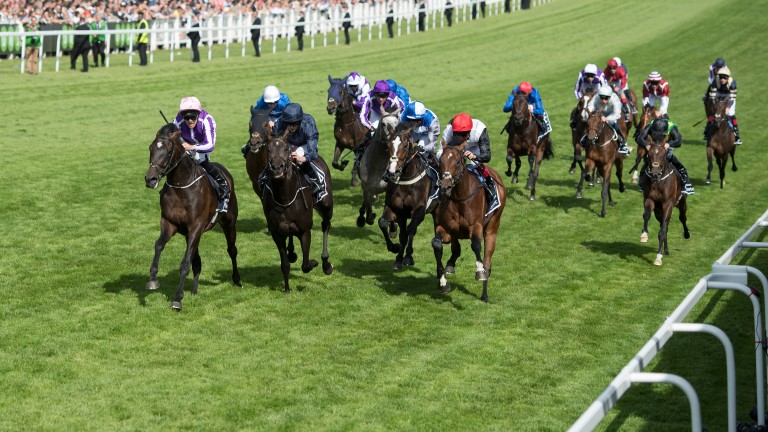 The Epsom Derby finish. Will it be the same order for the five who finished towards the back as they line up for Friday's King Edward VII Stakes at Royal Ascot?
Edward Whitaker
1 of 1
By Bruce Jackson 6:00PM, JUN 22 2017

A race that is colloquially known as the Royal Ascot Derby has the ingredients to justify that title with five of the Epsom Derby runners looking to restore their reputation in the usual intriguing match-up with less exposed rising stars who at one time or another were being touted as potential Derby winners.

Is Best Of Days ready to make up for lost time?

That Godolphin bought Best Of Days last summer said much for the colt's potential which was heightened by his win in the Group 2 Royal Lodge Newmarket in the autumn.

Injury has prevented him running since and any rush to get him to the Derby was resisted, but now his trainer Hugo Palmer is getting the right signs.

"I have been really, really pleased with his work. He seems to be improving all of the time and I'm excited about running him over a mile and a half. My only slight misgiving is that we are going into a Group 2 at Royal Ascot on his seasonal reappearance which is not an easy thing to do," said the Newmarket trainer.

Can Crystal Ocean turn round the Dante form?

Yet another horse who was shouted from the rooftops for the Derby at one stage, prompting a plunge ahead of his run in the Dante last month.

Despite a promising staying-on third to race rival Permian on only his third career start connections ruled the Sea The Star's colt out of Epsom.

Andrea Atzeni, who rode Crystal Ocean for the first time at York, said: "It was a pleasing run. He is a lovely big horse who was still immature in the race but he shaped really nicely and you could see how stepping up in trip would be in his favour.

"I had a sit on him the other day and he is in good shape and is getting better with his racing."

Can Permian return to his Dante and Cracksman form?

Permian could not repay his supplementary entry to the Derby after his Dante win when finishing tenth, failing to run to the form of either the Dante or his short-head second to Derby third Cracksman in April's Derby Trial.

"It was slight disappointing," said Charlie Johnston on the formbook reading. "He should probably have been fourth or so and he finished tenth, but he was physically fine afterwards and William [Buick] felt that maybe on that ground and in that class of race he didn't come down the hill well enough.

"He had a hard race, as they all did, but he had an easy week to put his weight back on and he's top-rated in a Group 2 at Royal Ascot so it's the right place for him."

Was Salouen unlucky at Epsom?

Trainer Sylvester Kirk is keen to find out the answer to that and whether he stays the trip after finishing a luckless 13th behind three of today's rivals.

"He had a rough old time in the Derby," said Kirk. "He got squeezed between runners and was down on his nose and lost all momentum when they were picking up from behind and then got stopped again.

"So he looked unlucky and might have finished closer but it is still a gamble with a mile and a half. If he gets the trip he should run a decent race."

Will the real Sir John Lavery stand up?

Sir John Lavery was being touted as the best of the Ballydoyle Derby hopes ahead of his run in the Lingfield Derby Trial. Sent off 11-8 favourite, he flopped in finishing a well-beaten sixth to race rival Best Solution, but trainer Aidan O'Brien is expecting a much bolder showing now.

O'Brien said: "He was disappointing at Lingfield, but he was a bit behind our other three-year-old colts at that time. We think he has come forward nicely since that run."

Saeed Bin Suroor, trainer of Best Solution
He ran well in the Derby but would prefer softer ground. This trip suits him well and he has been working nicely since Epsom.

Charlie Johnston, assistant to Mark Johnston, trainer of Frankuus
Frankuus has quite a bit to find and needs a career best to figure, but trip, track and conditions are as he would want them.

John Gosden, trainer of Glencadam Glory and Khalidi
Glencadam Glory ran a good race in the Derby and he should appreciate every inch of the trip. He's come out of the race well and we expect him to get further in time. Khalidi was a surprise entry at Epsom and ran a decent race. He seems fine but has had a busy spell so we'll see if he can bounce back.

Ralph Beckett, trainer of Intern
His owners were very keen to run and my concern is the ground could be too fast for him.

Brian Meehan, trainer of Raheen House
He would appreciate some rain but ran a very nice race last time in the Cocked Hat at Goodwood which he has improved from. He goes to Ascot with a very solid chance.

Charlie Appleby, trainer of Wolf Country
The drop back in trip didn’t really suit him in the Dante when he turned in well but just lacked a bit of pace. He has physically done well since. We have a bit to find on the ratings, but I feel he should be competitive back over a mile and a half. He has won twice with juice in the ground but his homework has been good on quicker going.