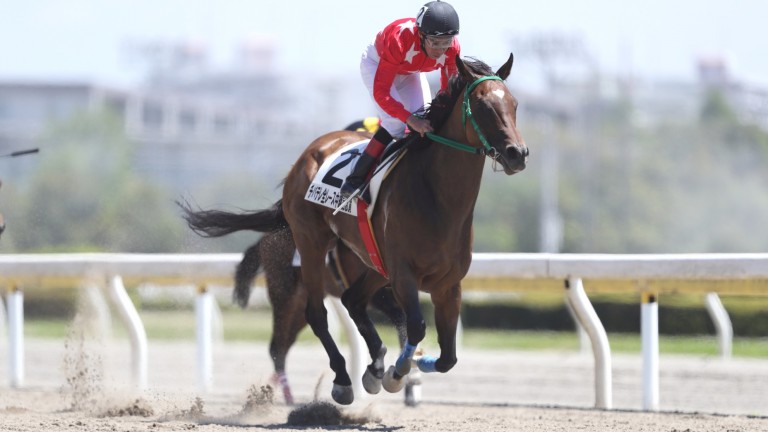 Veteran jockey Fumio Matoba reached a notable milestone in Japan on Friday when he recorded the 7,000th victory of his long career – at the age of 60.

He stands second in Japan's all-time list behind Takemi Sasaki, the famed 'Iron Man' of Japanese racing who retired in 2001 with 7,153 victories to his name.

Known as the Emperor of Ohi for his record at the Tokyo city-centre venue, Matoba achieved the feat at Funabashi to the east of the city, where he won the third race on seven-year-old mare Forged Digital.

The legendary Yutaka Take is the leading rider of all-time on JRA tracks, where he has amassed 3,890 successes, while the world leader is Russell Baze, the former North American-based rider who retired in June last year with a career total of 12,844 wins. The leading jockey still riding is Brazilian legend Jorge Ricardo, only 31 winners adrift of Baze but currently sidelined with a broken leg.

Matoba's total of 7,000 consists of 6,995 in NAR races plus only four at JRA venues and one in South Korea.

"I didn't realise this was my 7,000th because we only keep track of NAR results," he said after the win. "I thought I would have passed it already!"

The jockey, who started riding in 1973, is famed in Japan for his unique style of riding, known as the 'Matoba Dance' (see example in race finish in video above), which looks ungainly to western eyes as the jockey rises high out of the saddle, albeit in rhythm with his mount, in the drive to the line, using his ankles for support.

He returned to action only recently after a spell on the sidelines with a broken left hand.

"The hand is almost perfect again now and my body's fine," he added. "I hope to win my 7,000th NAR race as soon as possible and I want to say thank you to the fans who cheer me on and everyone who gives me the chance to ride good horses."

In 2007 Matoba required lifesaving surgery after he was kicked by a horse in the paddock and ruptured his spleen, losing a lot of blood.