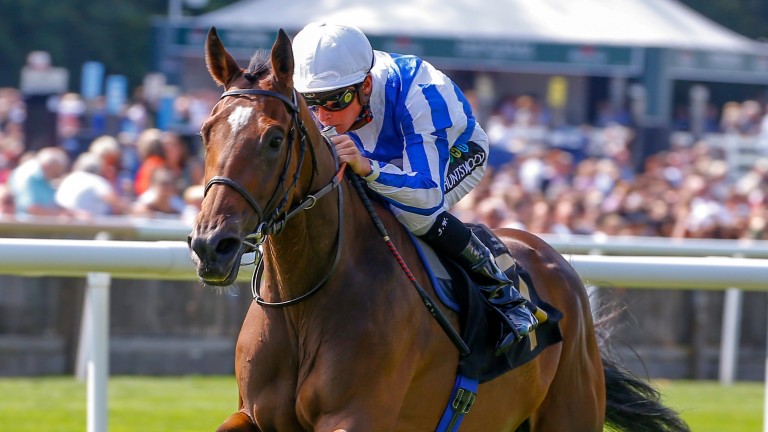 Danceteria: fourth in the Eclipse on Saturday
Mark Cranham
1 of 1
By Bruce Jackson UPDATED 12:49PM, JUL 9 2019

Amid the euphoria that greeted Enable's Coral-Eclipse victory at Sandown on Saturday not everyone will have noticed the late run of Danceteria that took the 50-1 shot into fourth place and fuelled connections' belief their four-year-old can go on to Group 1 success.

The outcome, which netted just over £40,000 in prize-money, tells only half the story, however, as there was an air of what might have been in the camp with the recent Group 3 winner in France, who can lay claim to the most improved horse in training, having been rated just 77 when winning a mile handicap at the track 13 months ago.

Habitually slowly away and needing a strong end-to-end gallop, Danceteria struggled to handle the track until given the rising ground, at which point he showed his trademark acceleration to turn a hopeless position into a promising Group 1 debut.

"People tend to think we are delusional," said trainer David Menuisier. "But we have proved we know what we are doing and Danceteria had every right to be in the race."

Owner Clive Washbourn, who sold a share to Australian Bloodstock this year, was wide-eyed with delight, reporting Jamie Spencer had not reached for his whip as Danceteria had been continually unbalanced until faced with the uphill run.

"Just think what he could do - it's exciting," said Washburn who was looking forward to the next Group 1 step that will come later this month in Germany.

Menuisier, charged with plotting a course to Australia for the Spring Carnivals in the autumn with a potential Cox Plate challenge, has another foreign adventure planned.

"The plan is to go for the Grosser Dallmayr-Preis Bayerisches Zuchtrennen, a Group 1 in Munich on July 28," said the Pulborough-based trainer who told the Weekender in a stable tour this week that Danceteria was potentially the best horse he has trained.

"He is never quick early in his races so you have to allow him to find his stride but he has an instant turn of foot and the quicker they go the better for him."

There could be a strong challenge for the Munich race worth €150,000 and run over ten furlongs, which closed with 14 entries, eight trained in Britain.