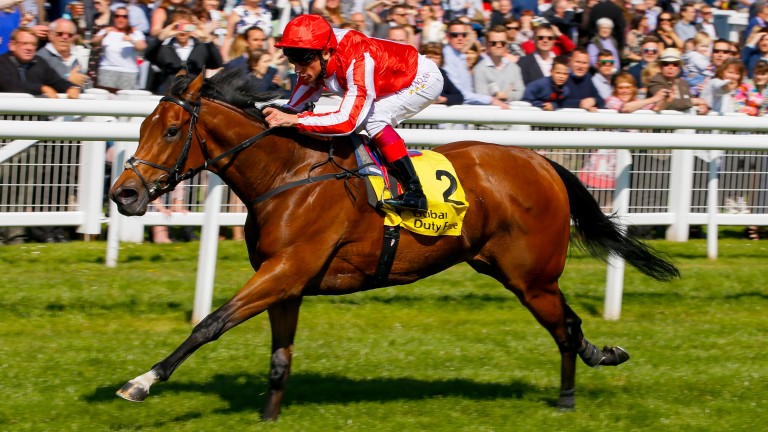 Dabyah was the latest filly from John Gosden’s powerful team to stake her Classic credentials with a clear-cut success that had some bookmakers shortening her to clear second best in the Qipco 1,000 Guineas market, despite the odds seeming stacked with her heading to Deauville for the French equivalent.

Gosden has monopolised the fillies’ Classic trials this week with stablemate Daban, who like Dabyah carries the red and white silks of owner Addullah Saeed Al Naboodah, taking the Nell Gwyn Stakes at Newmarket on Wednesday.

Yet despite Dabyah shortening to a low of 6-1 for the Newmarket Guineas after her winning return and Daban still as big as 14-1 for the same race, it is the Nell Gwyn winner who appears destined for the home Classic.

“I always feel the jockeys first comments when he gets off the horse are the most valuable,” said Gosden. “He is inclined to want to run Daban at Newmarket and Dabyah in France.”

Explaining why Frankie Dettori was swaying that way, the trainer added: “He feels if they get a bit of rain at Deauville it would suit her while the other filly is proven at Newmarket. But that’s what the jockey thinks and we’ll speak to the owner first.”

Asked to compare the two fillies, Gosden said: “Daban is very laid back while this horse is out of the gates and racing but I thought she pricked her ears and relaxed beautifully and finished it out well. I’ve not over-trained her - she’s exuberant. They’re two lovely fillies.”

Paddy Power installed Dabyah at 4-1 for the French 1,000 Guineas and the owner’s racing manager Bruce Raymond also seemed to favour sending her across the channel on May 13.

“There’s not much between them,” he said. “The other filly has a lot of speed and that could be a forte at Newmarket. This filly has been to France before and would probably handle a bit of cut. They can’t go together.”

There is no questions regarding the target of runner-up Urban Fox, who heads straight to Newmarket on May 7.

Trainer James Tate said: "She had a setback six weeks ago and has not done as much work as we wanted. We used this as a trial and I'm delighted and she'll improve going a mile."

Rhododendron, last year’s leading juvenile filly, remains a general 5-2 favourite for Newmarket and after stablemate Rain Goddess could finish only fourth, following the disappointing runs of Roly Poly and Brave Anna at Newmarket, her place at the top of the Ballydoyle pecking order is undiminished.

FIRST PUBLISHED 2:45PM, APR 22 2017
I always feel the jockeys first comments when he gets off the horse are the most valuable. He is inclined to run Dabyah in France

Please no more meetings - it's reached saturation point Do jockey bookings tell us Murphy may work his magic on Godolphin filly? Newbury sees light at end of tunnel as losses narrow in first half of 2021