Custodian of historic Owning Hill set to reach the top 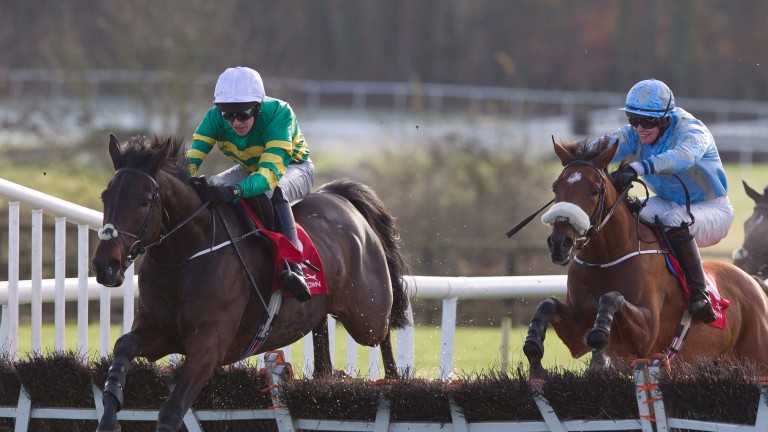 Landofhopeandglory: is now 10-1 favourite for the JCB Triumph Hurdle with Paddy Power
Patrick McCann
1 of 1
By David Jennings 7:25PM, NOV 21 2016

You don't often catch glimpses of the past and the future at the same time but, on a Monday morning acquired from Antarctica, the most famous hill in Irish racing allows us to reminisce about Joe Crowley while listening to his grandson Joseph O'Brien discuss his plans for the forthcoming Christmas festival at Leopardstown and beyond.

This is Owning Hill and if you didn't realise it was a hill on the way down, you certainly do on the way back up. Clapping eyes on the counties of Waterford and Tipperary while still standing in Kilkenny should really have prepared us all for the climb back to the bus, but the steepness of it still came as a shock. Perhaps my palate needs cauterising.

This is where Crowley began. This is from where his daughter Annemarie became the first female champion jumps trainer in Ireland in the 1992-93 season. This is where the first chapters of Aidan O'Brien's astonishing autobiography were penned. And, right now, this is where their 23-year-old son, Joseph, is already training Grade 1 winners. This is the land of hope and glory.

Fitting then that the first horse we see is Landofhopeandglory. The 102-rated Flat performer has made a silky-smooth transition to hurdling and has the Knight Frank Juvenile Hurdle at Leopardstown on St Stephen's Day on his agenda.

O'Brien jnr has already won the Triumph Hurdle, not in name but certainly in nature. Ivanovich Gorbatov's victory was all his doing, even if his father was the name next to the horse on the racecard at the time.

“It was unbelievable,” he recalls. “But trying to win it again is the thing. People don't have long memories.”

You don't need to have a long memory to remember Landofhopeandglory's most recent performance. He made it two wins from two at Punchestown last Saturday and most firms trimmed him for the JCB-backed Triumph afterwards.

“He was very good on the Flat and has developed into a nice hurdler so far," O'Brien continues. "The Triumph would be the plan for him but a hell of a lot can happen between now and then. He'll hopefully head to Leopardstown and might even go to Fairyhouse before then."

Ivanovich Gorbatov is next to parade. He could manage only third behind Nichols Canyon in Sunday's Morgiana Hurdle but the Grade 1 Ryanair Hurdle at Leopardstown on December 29 has already been pencilled in.

“I don't think he ran badly at all," said the trainer. "Nichols Canyon is rated 162 and we're 152 so he ran as well as could have been expected."

Big things are expected of Edwulf, who resumes his chasing career at Navan this weekend.

“He could be good over fences,” says O'Brien. “You can see that one of his hind legs is longer than the other. A lot of good horses have that. A lot of bad ones have it too, mind you!”

Slowmotion is the final part of the parade before we set off to see Exactoris and Lord Justice schooling.

With the bitter breeze causing numbness of toes and fingers, common sense prevails and the question and answer seminar moves a few miles down the road to the cute Kilkieran Cottage, where a tasty three-course meal hits the spot. (If you are thinking of going, have the goats cheese starter.)

“He's on the end of the phone whenever I need him,” is the reply when asked whether he confides in his famous father much.

We get to see the witty side of him too.

“What is your goal?” comes a question from the crowd.

“Not going out of business,” arrives the instant reply, before he elaborates: “You have to try to do the best with the raw materials you have. The aim is to try and train Group 1 and Grade 1 winners, though, isn't it?

“A huge number of winners have come off the hill and I just need to make sure I don't mess things up.”

Memories of Istabraq are evoked as he recalls his earliest memories of Leopardstown's Christmas festival, but the big thing we all want to know is how training compares to riding.

“I definitely get the biggest kick out of training,” he says without hesitation. “When I was riding it was very instinctive. Everything happened quickly. It's different now. You need to think about things and plan things. You can make any horse bad. There's always pressure, but pressure means that you have good horses."

The future of Owning Hill could not be in safer hands.

FIRST PUBLISHED 6:30PM, NOV 21 2016
I definitely get the biggest kick out of training. When I was riding it was very instinctive. Everything happened quickly. It is different now. You need to think about things and plan things