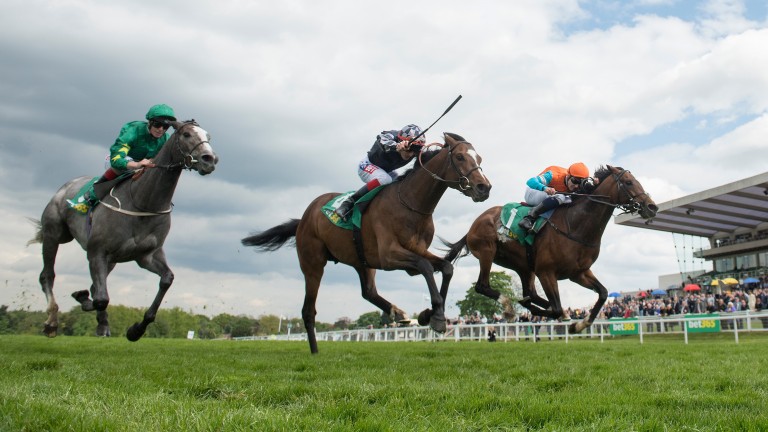 In the battle of the Frankels it was the stallion’s trailblazing son Cunco who came out on top for jockey Robert Tart and trainer John Gosden, who now faces a separate battle in taming the beaten favourite Monarchs Glen.

Cunco was the first Frankel to run, and to win, at Newbury in May last year. That the headstrong nature of the sire has passed on to many of his sons and daughters was evident in Cunco that day, but it was less so here as he was settled at the rear before being launched into a winning effort in the straight.

Victory in the bet365 Classic Trial at Sandown on Friday continued a dominating spell in such races for Gosden, for whom Daban, Dabyah, Shutter Speed and Cracksman have all won recognised Classic trials this month.

Much of the credit for harnessing Cunco's enthusiasm into positive action goes to regular rider Robert Havlin, who was not on board here as he waits to see if the BHA will reciprocate the six-month suspension imposed after a failed drugs test in France. However, he was on hand to watch at Sandown.

The mount went to Tart instead, the former leading apprentice who has found his feet again after joining Gosden as a work-rider.

He said: “I can’t thank Mr Gosden and the team enough. It was my first ride in a Group race, let alone winner, and all the credit has to go to Mr Gosden for giving me the chance.”

The Chester May meeting is the next stop for Cunco, who remains a 33-1 shot for the Investec Derby.

Gosden said: “He’s not very big but he’s got a heart as big as a lion. He was Frankel’s first winner and he’s always run well. He wants a mile and a half and I was thinking of going for the Chester Vase with him. I think that’s where he’ll go.”

Defeated odds-on favourite Monarchs Glen presents a different challenge. The Frankel colt raced freely in front before fading into fourth of the five runners, albeit the ground was partly put forward as a reason for a run that was in stark contrast to his eyecatching Kempton reappearance romp.

“Monarchs Glen was never confident and struggled on the ground,” Gosden said. “They’ve done a good job for the jumpers tomorrow but it’s not quite the same for our dainty Flat horses. But I’m not making excuses, it just didn’t suit him today.”

A step up in trip beckons for runner-up Intern, who was making his debut for Ralph Beckett.

The trainer said: “He's run really well. If he didn't go for the King Edward VII we might look at the Queen's Vase, up to a mile and six. I'm sure he'll get it on pedigree and style of racing.”