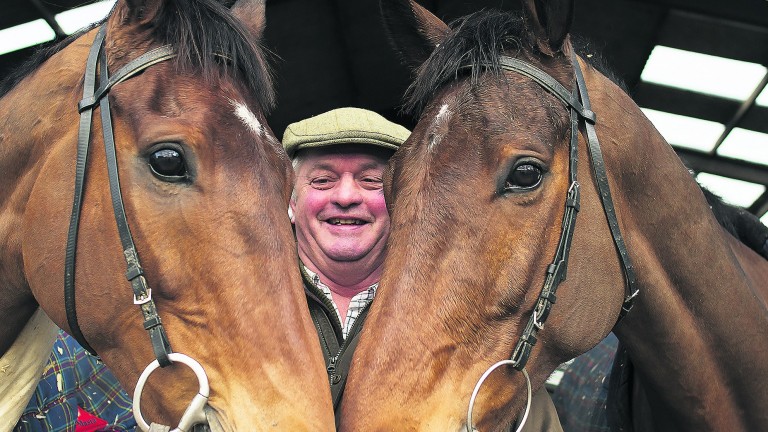 Your bird may have been dry, the roasties lacking in crunch and the sprouts overcooked. Consign all such disappointments to the past. The undoubted highlight of the Christmas menu is enough to whet any racing fan's appetite. For what we are about to receive we should all be truly thankful.

Much of our gratitude must go to Colin Tizzard. From his yard will travel two wonderful horses, one the most popular jumper in training, the other surely the most exciting. They will board the same horsebox before making the journey to Kempton, where thousands are poised to make an annual festive pilgrimage, clogging up some of Surrey's roads in order to witness in the flesh an utterly absorbing 32Red King George VI Chase.

Only five horses seek glory in a prize synonymous with legends such as Kauto Star, Desert Orchid, Wayward Lad and, deep in the black and white era, the incomparable Arkle. Yet although we are presented with one of the smallest fields in King George history, the big two could hardly be bigger.

In its build-up this is a race that has been all about Cue Card v Thistlecrack. Cue Card is the defending champion, a veteran with a chasing back catalogue chock-full of major victories. Thistlecrack is a mere novice, indisputably outstanding over hurdles but with no more than three runs over fences to his name. He did not need to take on his illustrious teammate this Boxing Day afternoon. How thrilling it is that Tizzard and owners John and Heather Snook have decided he should.

Had he contested the Grade 1 novice chase earlier on the card he would have been sent off at extremely prohibitive odds. It is a measure of his enormous talent that he could well be returned favourite to win racing's Christmas classic, just as he has headed the Timico Cheltenham Gold Cup betting since connections committed to making the switch to fences.

At his previous job he was exceptional. In the history of Racing Post Ratings no hurdler has ever put up a Cheltenham Festival performance superior to that which Thistlecrack delivered in March when, with contemptuous ease, he conquered the World under Tom Scudamore.

The two animals are only two years apart but light years in terms of experience. By the time Thistlecrack made his debut in April 2013, Cue Card – dear, sweet Cue Card – was already the winner of a Champion Bumper, Ascot Chase and Ryanair Chase. Since then he has added three runnings of the Betfair Chase, a Betfred Bowl (without coming off the bridle) and a King George. But for a cruel and luckless fall he might well also be a Gold Cup winner.

Compensation could, of course, come in March. Should he return to the Cotswolds having won a second King George he will give himself a second shot at plundering the Jockey Club's £1 million bonus. But to keep that very lucrative dream alive, Jean Bishop's ten-year-old, steered as usual by devoted partner Paddy Brennan, must first bring to an end the incredible winning streak of Thistlecrack.

What a showdown is in store. It is not, however, a match. Those fielding Josses Hill, Tea For Two and Silviniaco Conti must presumably consider an upset to be possible. All three do, at the very least, have a plausible chance, unlike Gray Wolf River, who tackles the 32Red.com Christmas Hurdle rated significantly worse than nine of the ten runners in Market Rasen's selling hurdle.

Like the King George, this aperitif brings together the old and the new. That said, these days The New One is the old one. Alongside another familiar face, My Tent Or Yours, he squares up to Yanworth, the youngster currently classified as Britain's leading prospect of winning the Stan James Champion Hurdle.

That is a race Ireland has come to dominate. A handful of horses and humans have also dominated the King George. The Dickinson family, David Elsworth, Francois Doumen and Paul Nicholls (hoping for his tenth win with Silviniaco Conti) have all enjoyed multiple triumphs. Seldom, though, can one trainer have gone into the contest with a grip as tight as Tizzard now holds.

Cue Card or Thistlecrack? Take your pick, take your seat and hold your breath.

FIRST PUBLISHED 6:00PM, DEC 25 2016
Although we are presented with one of the smallest fields in the race's history, the big two could hardly be bigger