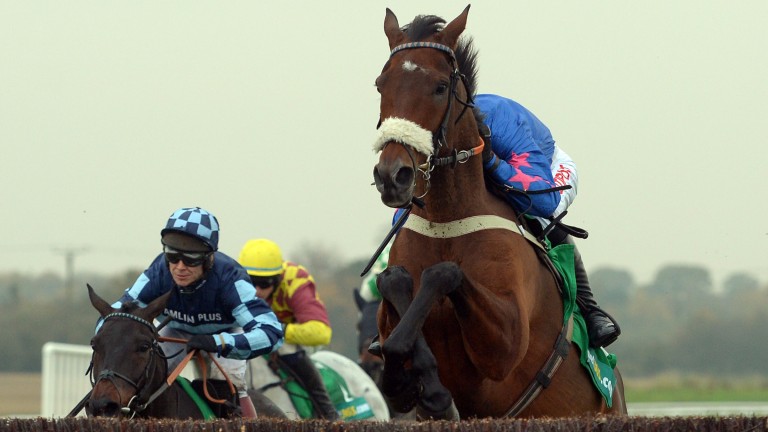 Cue Card has been tuned up for this Saturday's Charlie Hall Chase at Wetherby with a racecourse gallop and is as good as ever, according to his former rider Joe Tizzard, now assistant to father Colin.

The ten-year-old began last season with a decisive defeat of Dynaste and Ballynagour at Wetherby and went on to take the Betfair Chase at Haydock and the King George VI Chase at Kempton. However, his bid for Jockey Club Racecourses' £1 million triple crown bonus ended dramatically with a fall at the third-last in the Cheltenham Gold Cup when still going well.

At Aintree, Cue Card showed he was none the worse for that tumble by defeating Don Poli in the Bowl – a victory that compared well with anything he had ever achieved – and Saturday's race will hopefully be the springboard for a similar campaign.

Tizzard, who expects Cue Card to meet West Country rivals Dynaste and Menorah once again, said: "He's right on song. He had a little racecourse gallop and he's ready to go.

"Paddy [Brennan] rode him, and I rode one upsides. We didn't do a great deal but we wanted to get him away for a day, which we often do, and it worked perfectly. Paddy schooled him last Wednesday and he seems as good as ever. He's in lovely form."

Last season's surprise RSA Chase winner Blaklion will be among Cue Card's rivals, providing there is no firm in the going description.

Nigel Twiston-Davies said: "Blaklion is ready for the Charlie Hall – if it's proper decent good ground he'll be going, if there's any firm in it we'll reconsider."

Wetherby had been mooted as a possible launchpad for 2015 Gold Cup winner Coneygree's comeback from the injury which has kept him off the track since winning an intermediate chase at Sandown last November, but connections fear the ground will be too quick for him and he will not be entered.

Sara Bradstock, wife of trainer Mark and Coneygree's regular partner at home, explained: "He's in very good nick but we're waiting for some rain so we can get a racecourse gallop into him. We are not going to Wetherby. There's no rain forecast there and if they don't water it will be too quick by the weekend.

"He's done plenty of galloping on the all-weather and has schooled a lot in Lamburn – jumping brilliantly. He just needs to get on grass."

One intended racecourse gallop at Haydock's last Flat meeting has already been thwarted by the ground, but the Lancashire track remains the favoured venue for a similar exercise.

Bradstock said: "I'm on the phone to clerk of the course Kirkland Tellwright regularly and he's going to tell me when he thinks it's fit to go. We're not taking any risks, and it wants to be good to soft. If we run on the wrong ground we break him."

Coneygree is believed to have fully recovered from what Bradstock describes as "a little injury to the small bone below his hock," and she sounded a small note of caution before confirming an ambitious programme.

She said: "Physically I'd say he's as good as ever, but we don't know if it's going to take a run or two to get the fire back in his belly. He shows every sign of being ready for action though, and if by any chance he was to win at Haydock, the JCR bonus would have to be the plan."

Clerk of the course, Jonjo Sanderson, admitted Wetherby may have to water to prevent the ground being quicker than good for the Charlie Hall meeting.

"It's good, good to soft in places and parts of the back straight are certainly on the easy side at the moment," he said on Sunday.

"It's not a drying time of the year but there's not much rain on the horizon, just possibly 2mm or 3mm on Wednesday or Thursday. So we will decide in the week whether we need to water to maintain good ground, though we wouldn't need to put on much at all."