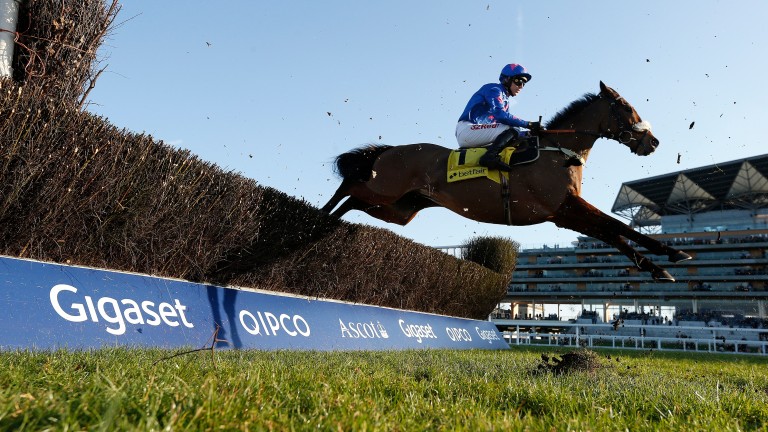 Cue Card will aim to provide another example of his bouncebackability as he dusts himself down from a Cheltenham Gold Cup fall for another tilt at winning the Betway Bowl.

Cue Card had his Gold Cup hopes dashed a second time last month when he exited the race at the third last fence, the exact same point he fell in the race in 2016.

Last year he recovered brilliantly from the setback, producing a performance on a par with his best efforts when pulverising Don Poli and Djakadam at Aintree and trainer Colin Tizzard reports him "in cracking form" for his follow-up attempt.

He not only bids to join a select group of back-to-back winners of the Grade 1 chase but also the first 11-year-old since Grey Abbey's triumph in 2005.

Tizzard said: "Cue Card never had a scratch on him after his fall. Paddy Brennan has been down to school him and I have to say he is in really cracking form.

"He has the best form going into the race, that's why he is rated the highest. If the real Cue Card turns up he is the one they have got to beat."

Cue Card was being hurried along by Brennan at the time he came down but Tizzard believes there was still plenty to play for.

"He was off the bit when he fell at Cheltenham but he was right up their backsides and if you backtrack that race a year and go back one fence he was doing exactly the same then before a gap opened and he came through it. It wasn't all over."

The stable had great expectations heading into the festival but emerged without a success and until last week had not enjoyed a winner for over a month.

Tizzard said: "Things were definitely quiet around Cheltenham time and have been for a while now. The good horses have been good and they are running all right now."

FIRST PUBLISHED 6:00PM, APR 5 2017
Cue Card never had a scratch on him after his fall. Paddy Brennan has been down to school him and I have to say he is in really cracking form