Cue Card bidding to live up to great expectations 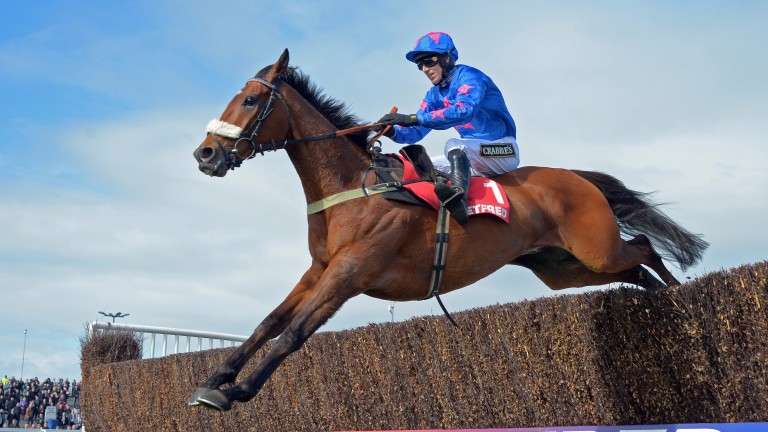 We have been here before. Cue Card. The Charlie Hall. Colin Tizzard's taken a tried-and-tested route with last year's easy winner, right down to the preparatory racecourse gallop, and yet for something so familiar it feels very different this time around. Expectations are so much higher.

Cue Card came into last year's renewal as Tizzard's undisputed stable star, but with plenty to prove – the Champion Bumper, Ascot Chase, Ryanair and Betfair Chase winner had not visited the winner's enclosure for almost two years. As the 11-4 favourite, he looked well worth taking on, while connections prayed a breathing operation on the entrapped epiglottis would make a difference. Oh, how it did.

With lungs returned to full function Cue Card bounded to victory. A second Betfair Chase followed, then a King George. He went to the Gold Cup in pursuit of a third festival victory and a £1 million bonus. Sent off at 5-2, only a fall three out, when travelling ominously well, denied him the opportunity to confirm his greatness.

A few weeks later a nine-length rout in Aintree's Bowl took his career prize-money past that of the bonus he could have landed but for forgetting to take off at Cheltenham. It proved, if nothing else, he was last season's most successful staying chaser.

Given all he has achieved since this time last year – nearly doubling his career tally of Grade 1s in a single season some six years after his first such success – it is almost bizarre the Tizzards' horse of a lifetime is now not even their shortest-priced Gold Cup contender. But such is the vast potential of Thistlecrack, who had not even jumped a fence in public until Tuesday.

So a horse who, as they came down the hill for the final time in the Gold Cup back in March, looked like he had nothing more to prove to anyone finds himself fighting to be the best horse in his own yard.

Tizzard has done his bit, leaving no stone unturned in the ten-year-old's preparation. Now it is all down to Cue Card.

They say expectation is the root of all heartache, and if Cue Card is to put the heartache on ice he will need to see off last year's runner-up Dynaste and 2014 winner Menorah.

He will also face Blaklion, three years his younger, who landed arguably the most stacked RSA Chase in recent years when putting the likes of Shaneshill, More Of That, No More Heroes, Vyta Du Roc, Roi Des Francs and Seeyouatmidnight to the sword. He is the same age as Virak, Irish Cavalier and Wakanda in a race that very much has the feel of old versus new.

It is new versus new in the day's other Grade 2, the West Yorkshire Hurdle, in which Nigel Twiston-Davies's Ballyoptic, a Grade 1-winning novice last season and already a Silver Trophy winner this, bids to up his World Hurdle contender status from 'potential' to 'bona fide'. Pertemps third If In Doubt and Champion Hurdle seventh Lil Rockerfeller are others who could enter the World Hurdle picture with victory.

Runaway Aintree Grade 1 winner Native River, who had Blaklion nearly seven lengths back in third that day, adds further depth but is using the race for an entirely different purpose as Tizzard looks to get the six-year-old spot on for next month's Hennessy Gold Cup, for which he is joint 10-1 favourite.

Victory there would make him an intriguing third string to the yard's Gold Cup bow. But for today he merely complicates an already tricky contest.

Yorkist and Ch'Tibello could bring further joy for Skelton at the track where he enjoyed his first big winner with Willow's Saviour in the Ladbroke and his Olympic gold medal-winning father presented Jim Crowley with his Flat jockeys' title earlier this month.

Leopardstown's November Handicap brings the curtain down on the Irish Flat season, for which Pat Smullen and Aidan O'Brien have their respective titles sewn up.

But the stage is now jump racing's, and in Cue Card it has booked one hell of an opening act.

FIRST PUBLISHED 6:00PM, OCT 28 2016
Given all he has achieved since this time last year it is somewhat bizarre the Tizzards' horse of a lifetime is now not even their shortest-priced Gold Cup contender